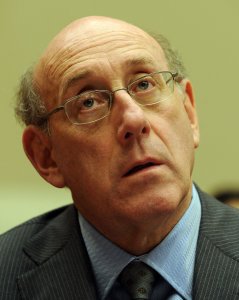 I had the firefighter's widow saying to me, 'Mr. Feinberg, why am I getting $1 million less than the stockbroker's husband, who was pushing a pencil on the 103rd floor and my husband died a hero? I must be missing something,

I must make sure that this $20 billion fund provides for prompt payment, full compensation

The president of the United States has instructed me: Get these claims paid, get them paid quickly

People are uncertain. They're worried about their financial certainty. It sure would help if the oil stopped. That's one problem I've got

Until the oil stops, you don't know how pervasive the oil spill will be, so you don't know if somebody who has not been harmed at all today will be harmed by additional oil next week

Originally from Brockton, Massachusetts, he received a Bachelor of Arts from the University of Massachusetts-Amherst in 1967 and a law degree from the New York University School of Law in 1970. He worked for five years as an administrative assistant and chief of staff for U.S. Senator Ted Kennedy and as a prosecutor for the U.S. Attorney General. Before founding his own firm The Feinberg Group (now Feinberg Rozen, LLP) in 1993, he was a founding partner at the Washington office of Kaye Scholer LLP.

Feinberg has served as Court-Appointed Special Settlement Master in cases including Agent Orange product liability litigation, Asbestos Personal Injury Litigation and DES Cases. Feinberg was also one of three arbitrators who determined the fair market value of the Zapruder film of the Kennedy assassination and was one of two arbitrators who determined the allocation of legal fees in the Holocaust slave labor litigation. He is a former Lecturer-in-Law at a number of U.S. law schools.

FULL ARTICLE AT WIKIPEDIA.ORG
This article is licensed under the GNU Free Documentation License.
It uses material from the Wikipedia article "Kenneth Feinberg."
Back to Article
/