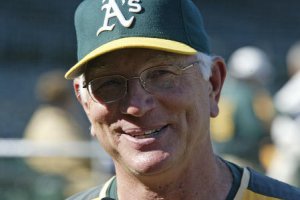 Last night showed me I don't need to be here again,'' Long told the paper shortly after he was called out on strikes with the bases loaded in the bottom of the ninth inning Monday night to end Oakland's season in a 4-3 loss to Boston in the deciding game of their American League Division Series.

Kenneth Edward Macha (pronounced /ˈmɑːkə/; born September 29, 1950, in Monroeville, Pennsylvania) is a former Major League Baseball player. From 2003 to 2006 he served as manager of the Oakland Athletics, whom he guided to the American League's Western Division championship in both his first season and his final season with the team. Macha also managed the Milwaukee Brewers from 2009 to 2010.

FULL ARTICLE AT WIKIPEDIA.ORG
This article is licensed under the GNU Free Documentation License.
It uses material from the Wikipedia article "Ken Macha."
Back to Article
/