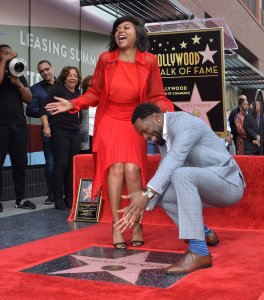 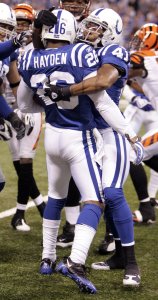 Entertainment News // 5 years ago
Taraji P. Henson on single motherhood: 'We try to do our best'
"Empire" star Taraji P. Henson admitted in the Oct. issue of Redbook that being a single mom to her 22-year-old son, Marcell Johnson, hasn't been easy.

Kelvin Darnell Hayden, Jr. (born July 28, 1983 in Chicago, Illinois) is an American football cornerback for the Indianapolis Colts of the National Football League. He was originally selected in the second round of the 2005 NFL Draft out of the University of Illinois. He returned a Rex Grossman interception for a touchdown in Super Bowl XLI. It was the first interception of his NFL career.

Hayden attended Hubbard High School in Chicago, and was a four-year starter in football. As a freshman cornerback, he was a first team All-PowerBar team selection and an All-Area selection after posting ten interceptions. As a sophomore quarterback, he passed for 21 touchdowns and rushed for seven more scores. As a junior tailback, he rushed for 2,135 yards (1,952 m), and was an All-Conference pick and an All-Area selection.

FULL ARTICLE AT WIKIPEDIA.ORG
This article is licensed under the GNU Free Documentation License.
It uses material from the Wikipedia article "Kelvin Hayden."