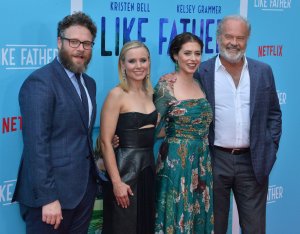 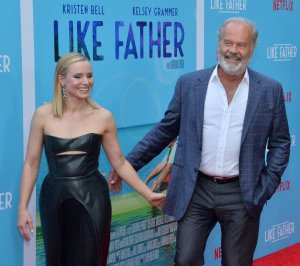 TV // 3 months ago
'Frasier' revival in discussions at Paramount+
A revival of comedy series "Frasier" is being eyed at Paramount+, the streaming service that is taking the place of CBS All Access on March 4.

Entertainment News // 9 months ago
Spencer Grammer 'fine' after NYC bar incident, says dad Kelsey Grammer
Spencer Grammer was not seriously injured during an altercation with a disgruntled customer at the New York City restaurant where she was dining.

Entertainment News // 9 months ago
What to stream this weekend: 'The Old Guard,' 'Greyhound'
New films starring Charlize Theron, Tom Hanks and Andy Samberg are just some of the entertainment options available this weekend as viewers say home during the COVID-19 pandemic.

TV // 10 months ago
'View,' 'Ellen,' 'Jeopardy!' and 'Y&R' win Daytime Emmys
"The View" and "The Ellen DeGeneres Show" were among the winners at the Daytime Emmy Awards' virtual prize presentation Friday.

Movies // 11 months ago
Kyle MacLachlan: Ailing Al Capone 'was difficult to watch'
Kyle MacLachlan reflects on his role as Al Capone's doctor in "Capone" and his career from David Lynch to upcoming roles as FDR and Thomas Edison.

Kelsey Grammer is out of the hospital, feeling great and about to resume normal activities at home

He will be released from the hospital early this week

I am angry about him. I never had the opportunity to speak for my sister before. I will now

Grammer speaks out about addictions Aug 23, 2007

At the beginning of the year when Jeff basically told us that they weren't going to be promoting 'Frasier' very heavily, that was a disappointment, but when you look at the popular success of 'Friends' as compared to the kind of viewership for 'Frasier,' you have to accept the fact that it had priority as a result of that

Allen Kelsey Grammer (born February 21, 1955) is an American actor and comedian. He is most widely known for his two-decade portrayal of psychiatrist Dr. Frasier Crane in the NBC sitcoms Cheers and Frasier. He has been nominated for fourteen Emmys, including one for playing his character on three sitcoms (the third being a guest appearance on Wings), as well as portraying the part on an episode of The John Larroquette Show, and has also worked as a television producer, director, writer, and as a voice artist. He has received many accolades for his role as the voice of Sideshow Bob on The Simpsons.

Grammer was born in St. Thomas, U.S. Virgin Islands to Sally Grammer (née Cranmer, 1928 – July 7, 2008), a singer, and Frank Allen Grammer, Jr., a musician and owner of a coffee shop and a bar & grill called Greer's Place. His parents divorced when Grammer was two. He attended Pine Crest School, a private preparatory school in Fort Lauderdale, Florida, for high school. Grammer then spent two years at the Juilliard School.

Grammer's personal life has been plagued by tragedies. In 1968, when Grammer was thirteen years old, his father, whom he had seen only twice since his parents' divorce, was shot and killed. In 1975, his younger sister Karen was abducted, raped, and murdered. In 1980, his twin half-brothers died in a scuba diving accident, and in 2001, David Angell, close friend and producer of Frasier, died in the 9/11 attacks.

FULL ARTICLE AT WIKIPEDIA.ORG
This article is licensed under the GNU Free Documentation License.
It uses material from the Wikipedia article "Kelsey Grammer."
Back to Article
/