U.S. News // 2 years ago
Ford recalls more than 874,000 trucks
Ford Motor announced a recall for more than 874,000 of its F-150 and Super Duty pickup trucks Friday so that an engine block heater cable can be replaced.

U.S. News // 2 years ago
Ford to restart production of F-150, other vehicles after shutdown
Ford said Thursday it'll resume production of F-150 pickups -- the best-selling truck in the United States -- after a fire two weeks ago halted assembly lines.

U.S. News // 3 years ago
Tesla passes GM as most valuable carmaker in U.S.
Tesla, the electric car company, has become the most valuable automaker in the United States, surpassing General Motors on Monday. 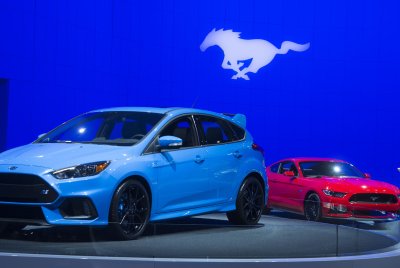 Business News // 4 years ago
U.S. auto sales slowed in July as top 3 automakers saw declines, figures show
The substantial growth that lasted for six years in the resurgent U.S. automobile industry might finally be leveling off, according to sales figures for July.

Kelley Blue Book, headquartered in Irvine, California, is the United States' largest automotive vehicle valuation company. The company's website is a source for new and used vehicle pricing and information. The company has become so identified with its services that the trademarked terms blue book and blue book value have become synonymous with a car's market value.

Kelley Blue Book Co., Inc., began as the Kelley Kar Company, a Los Angeles-based car dealership, in 1918. The dealership was founded by Les Kelley, an Arkansas-born businessman who started the dealership with three used Model T Fords and one employee, his 13-year-old brother Buster.

In order to obtain inventory, he began circulating lists of cars he wanted to acquire along with the price he was willing to pay for them. The price lists quickly became a trusted standard among Los Angeles area banks and car dealers.

FULL ARTICLE AT WIKIPEDIA.ORG
This article is licensed under the GNU Free Documentation License.
It uses material from the Wikipedia article "Kelley Blue Book."
Back to Article
/