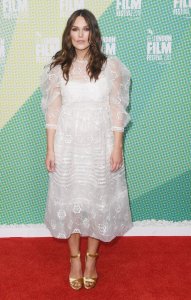 TV // 3 weeks ago
'Pride and Prejudice'-themed dating show coming to Peacock
"Pride & Prejudice: An Experiment in Romance," a dating show inspired by Regency-era England, is in the works at Peacock following the success of the Netflix series "Bridgerton."

Entertainment News // 10 months ago
What to stream this weekend: 'Misbehavior,' 'Father of the Bride' reunion
Keira Knightley protests the 1970 Miss World pageant in "Misbehaviour" and "The Great British Baking Show" Season 11 cooks up fresh delights this weekend in streaming entertainment.

I've no way of knowing if they could be potential rapists. I'm frightened out of my wits every time I see one of them

I haven't got a clue about how much I weigh. I do not own any scales. And I have noticed it creates an anger in people who are not skinny. People like to blame their insecurities on other people

I hate red-carpet events; I absolutely hate them. I don't like the fact that people write, 'Oh, you look like crap' in print. Or 'I don't like your arms!

Coco Chanel's strong personality, her bold temperament and her charisma were impressive

I've been playing this girl since I was 17. I'm 21 now and I'm on to very different things

Keira Christina Knightley ( /ˌkɪərə ˈnaɪtli/; born 26 March 1985) is an English actress and model. She began her career as a child and came to international prominence in 2002 after co-starring in the films Bend It Like Beckham and Pirates of the Caribbean: The Curse of the Black Pearl.

FULL ARTICLE AT WIKIPEDIA.ORG
This article is licensed under the GNU Free Documentation License.
It uses material from the Wikipedia article "Keira Knightley."
Back to Article
/