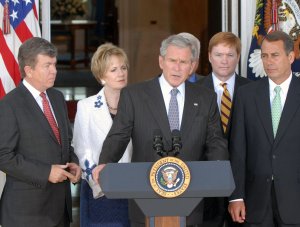 U.S. News // 2 months ago
House passes $1.5 trillion spending bill with billions in emergency aid for Ukraine
The U.S. House of Representatives passed a sweeping $1.5 trillion omnibus bill to keep the government running through end of September and includes billions of dollars in aid for Ukraine.

U.S. News // 2 years ago
Kay Granger, House's most senior Republican woman, faces GOP challenge
It's the question on the minds of Republicans from Washington to Cowtown: Is one of Texas' most powerful U.S. House members in political trouble? Kay Granger has a at least one well-heeled challenger.

Kay Granger (born January 18, 1943), a Republican politician from the U.S. state of Texas, currently represents the 12th congressional district (map) in the U.S. House of Representatives, the first Republican woman to represent Texas in the House.

Granger was born in Greenville, Texas, and grew up in Fort Worth, Texas, where she attended Eastern Hills High School, which recognized her as Distinguished Eastern Hills High School Graduate in 1993. She graduated from Texas Wesleyan University. She was elected to the Fort Worth city council in 1989 and was elected Mayor in 1991. Her tenure as mayor saw a drop in violent crime.

After the retirement of Congressman Pete Geren in 1996, both the Democratic and Republican parties worked to recruit Granger. Republicans were particularly bullish on their chances of winning the 12th. It had once been represented by Democratic Speaker of the House Jim Wright, but had been made significantly more affluent and Republican after the 1990 census. Granger made the decision to run as a Republican, much to the dismay of local GOP activists, who criticized Granger as being too liberal. She was elected by a wide margin, taking 56 percent of the vote. She was handily reelected in 1998 and has only faced serious opposition once, in 2000. In 2008, Granger defeated Democratic challenger Tracey Smith with 67% of the popular vote.

FULL ARTICLE AT WIKIPEDIA.ORG
This article is licensed under the GNU Free Documentation License.
It uses material from the Wikipedia article "Kay Granger."