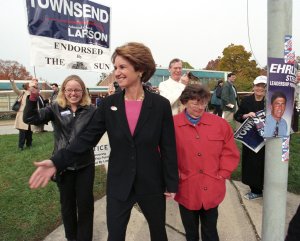 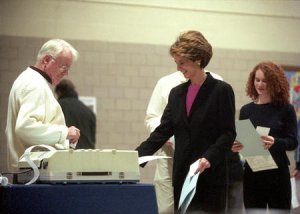 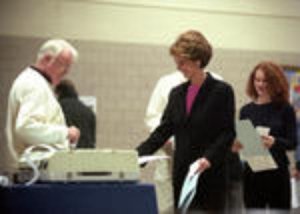 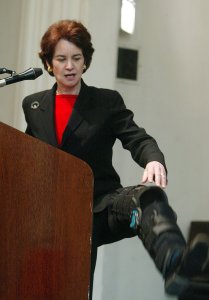 U.S. News // 5 months ago
RFK granddaughter, great-grandson missing while canoeing
The U.S. Coast Guard was searching for the daughter and grandson of former Maryland Lt. Gov. Kathleen Kennedy Townsend on Friday, one day after the two went missing in the Chesapeake Bay.

U.S. News // 1 year ago
Kennedys write pro-vaccine op-ed to counter RFK Jr.'s advocacy
The debate over vaccines has driven a wedge through the Kennedys, with several prominent family members writing an op-ed blasting Robert Kennedy Jr. for his anti-vaccination views.

U.S. News // 2 years ago
50 years after RFK's death, children question shooting evidence
Fifty years after the death of their father, two of Robert F. Kennedy's children believe evidence from the case should be reviewed.
World News // 7 years ago
Caroline Kennedy marks 50th anniversary of JFK's 1963 visit to Ireland
Ireland has been celebrating the 50th anniversary of U.S. President John F. Kennedy's 1963 visit with events featuring his daughter and members of the clan.
U.S. News // 8 years ago
Pollster: Kennedy name not what it was
Joseph P. Kennedy III will not have a cakewalk if he decides to run for a Massachusetts congressional seat, a pollster says.
Top News // 1 decade ago
Kennedy disenchanted with Clinton campaign
U.S. Sen. Edward Kennedy, who has endorsed Barack Obama as the Democratic presidential nominee, has reportedly become disenchanted with Hillary Clinton's style.
Top News // 1 decade ago
The Peter Principles: Seize the reins
Control of state political organizations can lead to control of the national party and the presidential nominating process. George W. Bush and the Republican governors used this to maximum effect in 2000. Could the same thing be on tap for the Democrats i
Top News // 1 decade ago
GOP govs cite economy in Nov. 5 wins
While there may have been a growing unease over the economy among voters in this month's elections, Republicans running for governor had few worries about money

Kathleen Hartington Kennedy Townsend (born July 4, 1951), is an American attorney who was the Lieutenant Governor of Maryland from 1995 to 2003. She ran unsuccessfully for Governor of Maryland in 2002. In 2010 she became the chair of the non-profit American Bridge, an organization that will raise funds for Democratic candidates and causes. She is member of the Kennedy family.

Townsend was born in Greenwich, Connecticut, the eldest of Robert F. Kennedy and Ethel Skakel Kennedy's 11 children, and the eldest grandchild of Joseph P. Kennedy and Rose Fitzgerald Kennedy. She was named for her aunt Kathleen Kennedy Cavendish, who had died in a plane crash in 1948. It was not assumed that the girls in the politically-oriented Kennedy family would run for office or become public persons, while she was growing up. However, after her uncle President John F. Kennedy was assassinated, her father wrote her saying, "As the oldest of the next generation you have a particular responsibility... Be kind to others and work for your country." Her family gave her the nicknames "Clean Kathleen," "the Nun," and "the Un-Kennedy".

She spent most of her childhood in McLean, Virginia and attended Stone Ridge School in nearby Bethesda, Maryland. She graduated from The Putney School in Vermont. She attended Radcliffe College (which later became part of Harvard University), receiving her bachelor's degree in history and literature with honors in 1974. She then studied at the University of New Mexico School of Law, receiving her Juris Doctor degree in 1978.

FULL ARTICLE AT WIKIPEDIA.ORG
This article is licensed under the GNU Free Documentation License.
It uses material from the Wikipedia article "Kathleen Kennedy Townsend."
Back to Article
/