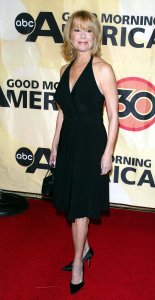 TV // 1 year ago
'Y&R,' Alex Trebek, Valerie Bertinelli win Daytime Emmys
"Y&R" won the top prize of Outstanding Drama, as well as the trophies for writing and directing, at the Daytime Emmy Awards ceremony in Pasadena on Sunday.

I am truly honored to join the 'Today' show family, many of whom have been friends and colleagues of mine for years

As you know, I wasn't looking to come back to television on a regular basis

The more I thought about it, the more I realized how much I would enjoy it

Kathie Lee Gifford (born Kathryn Lee Epstein, August 16, 1953) is an American television host, singer, songwriter and actress, best known for her 15-year run (1985–2000) on the talk show Live with Regis and Kathie Lee, which she co-hosted with Regis Philbin. She has received 11 Daytime Emmy nominations and won her first Daytime Emmy in 2010 as part of The Today Show team.

Before her long stint in talk shows, Gifford's first television exposure was that of Tom Kennedy's singer/sidekick on Name That Tune, from 1974-78. On April 7, 2008, Gifford began co-hosting the fourth hour of NBC's Today Show, alongside Hoda Kotb.

Kathie Lee Gifford, born Kathryn Lee Epstein in Paris, France, is the daughter of Joan (née Cuttell; born January 20, 1930), a singer, and Aaron Epstein (March 19, 1924 – November 19, 2002), a musician and former U.S. Navy officer. Aaron Epstein was stationed with his family in France at the time of Gifford's birth. Gifford grew up in Bowie, Maryland, and attended Bowie High School. During high school, Gifford was a singer in a folk group, "Pennsylvania Next Right," which performed frequently at school assemblies. During her senior year at high school she dated and went to prom with Michael Bray, who would later become an anti-abortion activist who was convicted for acts of terrorism. After high school graduation, Gifford attended Oral Roberts University in Tulsa, Oklahoma, studying drama and music.

FULL ARTICLE AT WIKIPEDIA.ORG
This article is licensed under the GNU Free Documentation License.
It uses material from the Wikipedia article "Kathie Lee Gifford."
Back to Article
/