Movies // 1 year ago
Kristen Stewart to star in 'Charlie's Angels' re-boot
Director Elizabeth Banks confirmed via Twitter who will star in her upcoming, big-screen re-boot of "Charlie's Angels." 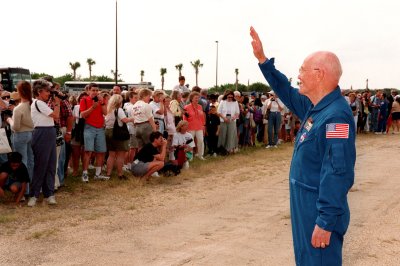 Top News // 3 years ago
The Almanac
On Oct. 29, 1998, Sen. John Glenn, D-Ohio, who in 1962 became the first U.S. astronaut to orbit Earth, returned to space aboard the shuttle Discovery. At 77, he became the oldest person to travel in space.

She was a selfless person who loved her family and friends with all her heart, and what a big heart it was

She was a selfless person who loved her family and friends with all her heart, and what a big heart it was

Kate Jackson (born October 29, 1948) is an American actress, director, and producer. She is a three-time Emmy Award nominee, twice in the Best Actress category and once in the Best Supporting Actress category. She has also been nominated for several Golden Globe Awards, and has won the title of Favorite Television Actress in England, and Favorite Television Star in Germany several times for her work in the television series, Scarecrow and Mrs. King.

She also co-produced that series through her production company, Shoot the Moon Enterprises Ltd. with Warner Brothers Television. She is perhaps best-known for her role as Sabrina Duncan in the hugely popular 1970s television series Charlie's Angels. Jackson has starred in a number of theatrical and TV films, and played the lead role on the short-lived television adaptation of the film Baby Boom.

Jackson is a breast cancer survivor following two bouts with the disease in the late 1980s, and she serves as a spokeswoman for the American Heart Association.

FULL ARTICLE AT WIKIPEDIA.ORG
This article is licensed under the GNU Free Documentation License.
It uses material from the Wikipedia article "Kate Jackson."
Back to Article
/