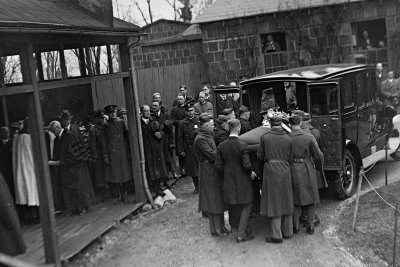 Karla Faye Tucker (November 18, 1959 – February 3, 1998) was convicted of murder in Texas in 1984 and put to death in 1998. She was the first woman to be executed in the United States since 1984, and the first in Texas since 1863. Because of her gender and widely-publicized conversion to Christianity, she inspired an unusually large national and international movement advocating the commutation of her sentence to life imprisonment, a movement which included a few foreign government officials.

Karla Tucker was born and raised in Houston, Texas, the youngest of three sisters. Her father Larry was a longshoreman on the Gulf of Mexico. The marriage was very troubled, and Tucker started smoking with her sisters when she was eight years old. At the age of ten, her parents divorced, and during the divorce proceedings, she learned that she had been the result of an extramarital affair. By age 12, she had turned to drugs and sex. When she was 14, she dropped out of school and followed her mother Carolyn, a rock groupie, into prostitution and began traveling with the Allman Brothers Band, The Marshall Tucker Band, and the Eagles. At age 16, she was married briefly to a mechanic named Stephen Griffith. In her early 20s, she began hanging out with bikers, and met a woman named Shawn Dean and her husband Jerry Lynn Dean, who introduced her to a man named Danny Garrett in 1981.

After having spent the weekend doing drugs with her boyfriend Danny Garrett and their friends, Tucker and Garrett entered Jerry Dean's home around 3:00 am on Monday 14 June 1983 intending to steal Dean's motorcycle. James Leibrant, a friend, went with them to Dean's apartment complex. Leibrant reported that he went looking for Dean's El Camino while Tucker and Garrett entered the apartment with a set of keys that Tucker claimed Shawn Dean had lost and Tucker had found.

FULL ARTICLE AT WIKIPEDIA.ORG
This article is licensed under the GNU Free Documentation License.
It uses material from the Wikipedia article "Karla Faye Tucker."
Back to Article
/