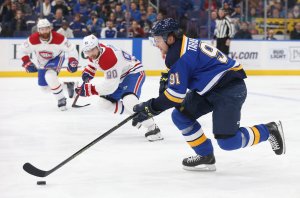 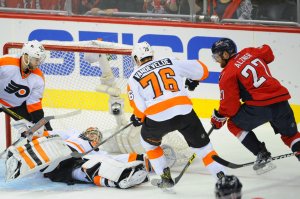 NHL // 3 years ago
Canadiens look to bounce back against Flames
The Montreal Canadiens are off to an unexpectedly good start this season with a 4-1-2 record but are facing their first bit of adversity as they prepare to host the Calgary Flames at Bell Centre on Tuesday.

NHL // 5 years ago
Penguins open 3-1 lead over Capitals without Sidney Crosby
The Pittsburgh Penguins overcame the absence of center Sidney Crosby to beat the Washington Capitals in a pivotal Game 4 of the Eastern Conference semifinals.

NHL // 5 years ago
Washington wins in OT, but Pittsburgh loses Crosby
PITTSBURGH -- The story of the only NHL playoff game on the schedule Monday might have belonged solely to Washington Capitals defenseman Kevin Shattenkirk, about how he rebounded from some tough games this postseason to score in overtime to give the Capitals a 3-2 win over the Pittsburgh Penguins in Game 3 of an Eastern Conference semifinal series.

Karl Alzner (born September 24, 1988) is a Canadian professional ice hockey defenceman, currently playing for the Washington Capitals He was drafted in the first round, 5th overall, by the Capitals in the 2007 NHL Entry Draft. A standout in junior, Alzner won two World Junior Hockey Championship gold medals with team Canada, and was named the Western Hockey League (WHL)'s top player and Canadian Hockey League (CHL)'s top defenceman in 2008.

Alzner played four Western Hockey League (WHL) seasons with the Calgary Hitmen as part of a standout junior career. He was a member of Canada's gold-medal winning team at the 2007 World Junior Hockey Championships as one of only two players who had not been selected in the NHL draft (the other being Sam Gagner). Shortly after returning to Calgary after the World Junior Championships, Alzner headed to Quebec City, Quebec to play in the 2007 Top Prospects Game. Alzner was joined by two other players from the Hitmen: Brett Sonne and Alex Plante. Alzner and Sonne played for the White team, while Plante joined the victorious Red team.

Alzner was an assistant captain in the 2007 Super Series against the Russian junior team, and was named captain of Team Canada for the 2008 World Junior Championships, both of which were won by Canada. Alzner was named the WHL Player of the Year and Defenceman of the Year for the 2007–08 WHL season. He was also named the top defenceman in the Canadian Hockey League.

FULL ARTICLE AT WIKIPEDIA.ORG
This article is licensed under the GNU Free Documentation License.
It uses material from the Wikipedia article "Karl Alzner."