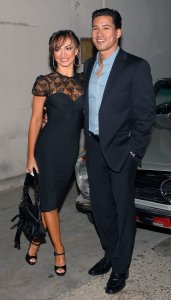 TV // 5 years ago
Karina Smirnoff departing 'Dancing with the Stars'
Karina Smirnoff announced she will not return for season 20 of ABC reality competition "Dancing with the Stars" Tuesday on Instagram.
Entertainment News // 5 years ago
Mario Lopez, Britney Spears reportedly had one-night stand
Mario Lopez revealed he had a one-night stand with a "mega pop star" in his memoir, and sources say the person was Britney Spears.

We were kind of rushing to do the dress rehearsal and during the pull-out, a part of my rib twisted in and pinched a nerve

The only thing we've decided is next year in June

My heart jumped out a couple of times, but then I was like, 'Enjoy this because how often do you get to perform at the Emmys?' And then it just felt like it went very fast. I wanted to do it a couple of more times to really get into it

You have inspired me in so many ways. ... I am proud to have been your dance partner and even more proud to be your friend

She is "the first woman to ever make the British Professional Final with three different partners".

FULL ARTICLE AT WIKIPEDIA.ORG
This article is licensed under the GNU Free Documentation License.
It uses material from the Wikipedia article "Karina Smirnoff."
Back to Article
/