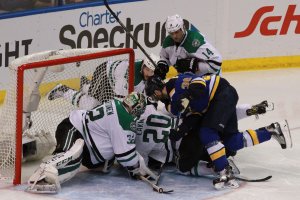 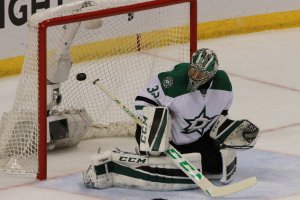 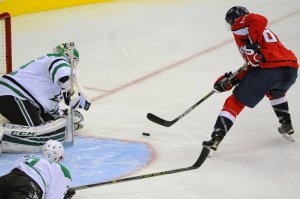 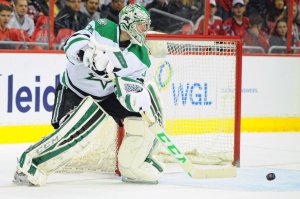 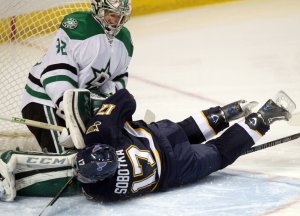 NHL // 5 years ago
Viktor Arvidsson, Craig Smith lead Nashville Predators past Dallas Stars
DALLAS -- The Nashville Predators were already assured of a spot in the Stanley Cup playoffs, but they wanted to ensure their offense is firing on all cylinders heading into the postseason.

NHL // 5 years ago
Dallas Stars, Kari Lehtonen shut out Carolina Hurricanes
RALEIGH, N.C. -- The Dallas Stars won't be in the NHL playoffs this season, but they're trying to impact who will be.

NHL // 5 years ago
NHL roundup: recap, scores, notes for every game played on March 24
PITTSBURGH -- Anthony Beauvillier and John Tavares scored in the shootout to give the New York Islanders a 4-3 win against the Pittsburgh Penguins at PPG Paints Arena on Friday.

NHL // 5 years ago
NHL roundup: recap, scores, notes for every game played on March 20
NASHVILLE, Tenn. -- Ryan Ellis scored two goals and Pekka Rinne stopped 25 shots Monday night as the Nashville Predators warmed up after a sluggish first period for a 3-1 win over the Arizona Coyotes in Bridgestone Arena.

NHL // 5 years ago
Kari Lehtonen, Dallas Stars shut out San Jose Sharks
DALLAS -- The Stars are on the brink of being eliminated from playoff contention, but thanks to Curtis McKenzie, who scored the game's lone goal, and Kari Lehtonen, who stopped all 30 shots he faced, Dallas gave the home fans something to cheer about Monday.

NHL // 5 years ago
Back from illness, Brian Elliott leads Calgary Flames past Dallas Stars
CALGARY, Alberta -- Brian Elliott got back in his routine on Friday, won the battle with the flu and beat the Dallas Stars.

Kari Lehtonen (born November 16, 1983) is a Finnish professional ice hockey goaltender currently playing for the Dallas Stars of the National Hockey League (NHL). He was selected second overall in the 2002 NHL Entry Draft by the Atlanta Thrashers, becoming the highest-drafted European goaltender as well as the highest Finnish player ever in NHL history.

Kari Lehtonen was drafted second overall in the 2002 NHL Entry Draft by the Atlanta Thrashers after an outstanding 2001–02 season in the Finnish SM-liiga. Lehtonen was the backup goalie for Jokerit, but captured the starting position and won the Urpo Ylönen trophy, given to the best goalie of the season, and the league's playoff MVP award, the Jari Kurri trophy. Lehtonen stayed with Jokerit for one more season before crossing the sea.

During the 2003–04 NHL season, Lehtonen mostly spent his time with the Chicago Wolves, the Thrashers' American Hockey League (AHL) affiliate, but he was called up for a number of occasions and played four games for the Thrashers, winning all four of them and posting one shutout. After posting a .953 save percentage and 1.25 goals against average (GAA), Lehtonen spent the majority of the year in the AHL.

FULL ARTICLE AT WIKIPEDIA.ORG
This article is licensed under the GNU Free Documentation License.
It uses material from the Wikipedia article "Kari Lehtonen."