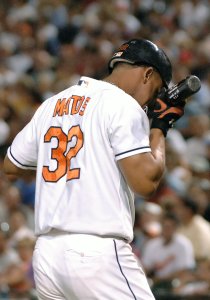 Kameron David Loe (born September 10, 1981 in Simi Valley, California) is a professional baseball pitcher for the Milwaukee Brewers He previously pitched in Major League Baseball for the Texas Rangers. At 6' 9" tall, Loe is one of the tallest players in the game and also has a 7 foot boa constrictor named Angel which he keeps in the clubhouse. In 2010, he was forced to place Angel in the care of someone else, as the Brewers would not allow the boa in their clubhouse.

Loe played college baseball at California State University, Northridge from 1999 to 2002, and was drafted by the Rangers in the 20th round of the 2002 Major League Baseball Draft.

FULL ARTICLE AT WIKIPEDIA.ORG
This article is licensed under the GNU Free Documentation License.
It uses material from the Wikipedia article "Kameron Loe."
Back to Article
/