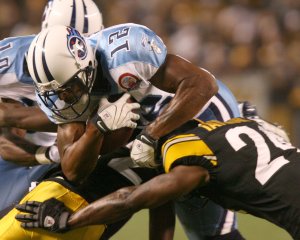 Justin Gage (born January 25, 1981 in Indianapolis, Indiana) is an American football wide receiver for the Tennessee Titans of the National Football League. He was originally drafted by the Chicago Bears in the fifth round of the 2003 NFL Draft. He played college football at Missouri.

Gage attended the University of Missouri where he played both football and basketball. He was on the Tigers basketball team that reached the Elite Eight in the 2002 NCAA Men's Division I Basketball Tournament. He was known as more of a scrappy player in basketball, once fouling out in the first half. In football, he started out as a quarterback, but moved to wide receiver with the arrival of Brad Smith and coach Gary Pinkel. He went on to have a stellar career with the Tigers.

Gage spent four years with the Chicago Bears, but signed with the Titans as a free agent following the 2006 season. In 2007 Gage tied for the Tennessee Titans lead with 55 receptions and led the team with 750 receiving yards. In 2008, Gage led his team in receiving yards, but was behind in receptions due to a knee injury early into the regular season. Despite his early setback, he had a career high number of touchdowns(6).

FULL ARTICLE AT WIKIPEDIA.ORG
This article is licensed under the GNU Free Documentation License.
It uses material from the Wikipedia article "Justin Gage."