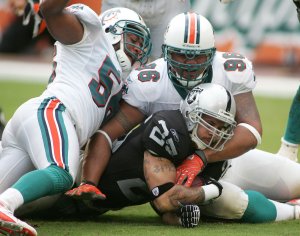 NFL // 3 years ago
2018 NFL Combine exclusive: Top 25 results of century
Two records were set in dramatic fashion and several prospects etched their names among the best performances of the century during the NFL Scouting combine.

Justin Fargas (born January 25, 1980 in Encino, California) is an American football running back for the Oakland Raiders of the National Football League.

Fargas attended the University of Michigan, as a highly regarded football prospect, for three years (1998-2000). He was named one of the Top 10 Freshmen in the country by Sports Illustrated. During his freshman year he ran for 277 yards with 1 TD on 77 carries (3.6 avg.) in 10 games. He started there as a running back before switching to safety in the middle of the 2000 season. Yet his college career at Michigan was cut short during his freshman season when he broke his leg. He was redshirted in 1999 while he rehabilitated his broken right leg.

After looking at both California and Southern California, Fargas chose to transfer to Southern California in 2001. Due to NCAA transfer rules he sat out the 2001 season. In 2002, his final season in college, Fargas rushed for 715 yards on 161 carries (4.4 yards per rush) with the Trojans.

FULL ARTICLE AT WIKIPEDIA.ORG
This article is licensed under the GNU Free Documentation License.
It uses material from the Wikipedia article "Justin Fargas."
Back to Article
/