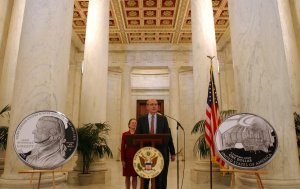 Stephen Gerald Breyer ( /ˈbraɪər/; born August 15, 1938) is an Associate Justice of the U.S. Supreme Court. Appointed by Democratic President Bill Clinton in 1994, and known for his pragmatic approach to constitutional law, Breyer is generally associated with the more liberal side of the Court.

Following a clerkship with Supreme Court Associate Justice Arthur Goldberg in 1964, Breyer became well-known as a law professor and lecturer at Harvard Law School starting in 1967. There he specialized in the area of administrative law, writing a number of influential text books that remain in use today. He held other prominent positions before being nominated for the Supreme Court, including special assistant to the United States Assistant Attorney General for Antitrust, and assistant special prosecutor on the Watergate Special Prosecution Force in 1973.

In his 2005 book Active Liberty, Breyer made his first attempt to systematically lay out his views on legal theory, arguing that the judiciary should seek to resolve issues to encourage popular participation in governmental decisions.

FULL ARTICLE AT WIKIPEDIA.ORG
This article is licensed under the GNU Free Documentation License.
It uses material from the Wikipedia article "Justice Stephen Breyer."
Back to Article
/