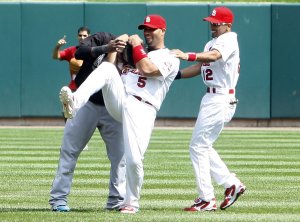 Julio Cesar Lugo (born on November 16, 1975, in Barahona, Dominican Republic) is a Dominican professional baseball infielder for the Atlanta Braves of Major League Baseball. He bats and throws right-handed. Lugo is the older brother of baseball pitcher Ruddy Lugo.

Lugo attended Fort Hamilton High School in Brooklyn, New York, where he batted .350. He also played sandlot baseball for the Youth Service League in Brooklyn, New York whose alumni include Manny Ramírez and Shawon Dunston. Lugo starred at Connors State College in Warner, Oklahoma prior to being drafted by the Astros in the 43rd round of the 1994 amateur draft. He signed with them on May 17, 1995.

After being released by the Astros in 2003, Lugo played very briefly in Triple-A, but after a month was signed by the Tampa Bay Devil Rays. After spending three seasons with the Devil Rays, he was traded at the 2006 trade deadline, to the Los Angeles Dodgers for Joel Guzman and Sergio Pedroza.

FULL ARTICLE AT WIKIPEDIA.ORG
This article is licensed under the GNU Free Documentation License.
It uses material from the Wikipedia article "Julio Lugo."