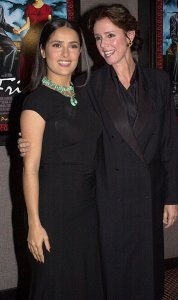 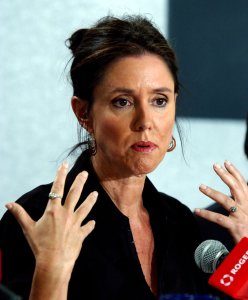 Entertainment News // 3 years ago
Clive Owen to star in Broadway revival of 'M. Butterfly'
British actor Clive Owen is to portray Rene Gallimard in the first Broadway revival of David Henry Hwang's Tony Award-winning play, "M. Butterfly."
Music // 6 years ago
'Spider-Man' musical to close on Broadway, producers confirm
The stage musical "Spider-Man: Turn Off the Dark" will end its three-year run on Broadway in January, then head to Las Vegas, producers announced Tuesday.
Music // 7 years ago
Alice Cooper is in talks to join 'Spider-Man' Broadway musical
Rocker Alice Cooper is in talks to play the Green Goblin in the Broadway musical "Spider-Man: Turn Off the Dark," the New York Post reported.

This is our personal interpretation, it's not a documentary, so if we take something from the diary like, 'When the accident happened death danced around my bed,' she wouldn't say that when we could show it. Or when we say that the description of the accident was almost soundless, you don't hear people screaming, it's a different kind of silence through Elliott's music that we make

I think one of the most amazing things about her story, we never used the word lesbian, we don't use the word bi-sexual -- you did

This is our personal interpretation, it's not a documentary, so if we take something from the diary like, 'When the accident happened death danced around my bed,' she wouldn't say that when we could show it?' Or when we say that the description of the accident was almost soundless, you don't hear people screaming, it's a different kind of silence through...the music that we make

Having recently finished shooting 'The Tempest' with Reeve as the young prince, I am thrilled to cast him in an entirely different role as Peter Parker in 'Spider-Man,

Julie Taymor (born December 15, 1952) is an American director of theater, opera and film. Taymor's work has received many accolades from critics, and she has earned two Tony Awards out of four nominations, the Drama Desk Award for Outstanding Costume Design, an Emmy Award and an Academy Award nomination for Original Song. She is widely known for directing the stage musical, The Lion King, for which she became the first woman to win the Tony Award for directing a musical, in addition to a Tony Award for Original Costume Design. She had been the director of the Broadway musical Spider-Man: Turn Off the Dark before leaving in March 2011, after four months of previews (the longest preview period for any show in Broadway history), following artistic differences with the producers.

Taymor was born in Newton, Massachusetts, the daughter of Elizabeth (née Bernstein), a political science teacher, and Melvin Lester Taymor, a gynecologist, both of Jewish descent. Taymor's interest in theatre took root early in her life. At the age of seven, she was already drawing her sister into stagings of children's stories for her parents. By age nine, she was entranced by the Boston Children's Theatre and became involved with them. In high school, she became interested in international travel, and made trips to both Sri Lanka and India with the Experiment in International Living. Being the youngest member of theatre groups became common, as she joined Julie Portman's Theatre Workshop of Boston at the age of 15. Yearning for a more in-depth approach, Taymor went to Paris to study with L'École Internationale de Théâtre Jacques Lecoq. During her studies there, she became exposed to mime which helped in the development of her physical sensibilities.

Although in 1970 Taymor was enrolled in Oberlin College in Ohio, she sought experience with Joseph Chaikin's Open Theatre and other companies and studied through correspondence. Hearing that director Herbert Blau would be moving to Oberlin, she returned there and auditioned successfully, becoming, once again, the youngest member of a troupe. In 1973, Taymor attended a summer program of the American Society for Eastern Arts in Seattle. The instructors were performers of Indonesian topeng masked dance-drama and wayang kulit shadow puppetry. This would prove to have a great effect on Taymor in later years. Taymor graduated from Oberlin College with a major in mythology and folklore and Phi Beta Kappa honors in 1974.

FULL ARTICLE AT WIKIPEDIA.ORG
This article is licensed under the GNU Free Documentation License.
It uses material from the Wikipedia article "Julie Taymor."
Back to Article
/