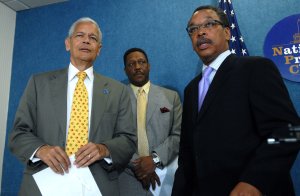 I wouldn't say the deal fell through -- it's been slightly delayed

Horace Julian Bond, known as Julian Bond, (born January 14, 1940) is an American social activist and leader in the American Civil Rights Movement, politician, professor and writer. While a student at Morehouse College in Atlanta, Georgia, during the early 1960s, he helped found the Student Nonviolent Coordinating Committee (SNCC). He was the first president of the Southern Poverty Law Center. Bond was elected to both houses of the Georgia Legislature, where he served a total of 20 years. He was chairman of the National Association for the Advancement of Colored People (NAACP) from 1998 to 2010.

Born in Nashville, Tennessee, Bond and his family moved when he was five to Pennsylvania, when his father, Dr. Horace Mann Bond, was selected as the first African-American president of Lincoln University, his alma mater. Bond first studied at George School, a private Quaker preparatory boarding school near Newtown, Pennsylvania.

Beginning in 1957, Bond attended Morehouse College, a historically black college in Atlanta. While there, he earned a varsity letter for swimming. He also helped found a literary magazine called The Pegasus which was founded by his friend. He worked as an intern at Time magazine. He was also a member of the only class taught by Dr. Martin Luther King, Jr.

FULL ARTICLE AT WIKIPEDIA.ORG
This article is licensed under the GNU Free Documentation License.
It uses material from the Wikipedia article "Julian Bond."
Back to Article
/