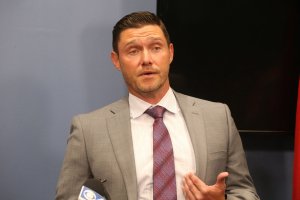 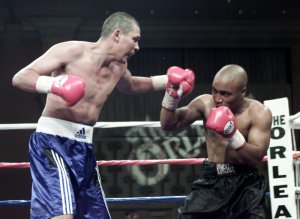 U.S. News // 1 year ago
Missouri officer charged with assault for hitting suspect with SUV
Prosecutors on Wednesday charged a former Florissant, Mo., police detective with assault after he was caught on camera appearing to strike a suspect with an SUV.

Sports News // 6 years ago
Copeland, Smith-Rivera both score 17 as Georgetown upsets 'Nova
Jabril Trawick scored 10 points and anchored Georgetown's stifling defense as the Hoyas limited No. 4 Villanova to 33.3 percent shooting and took down the Wildcats, 78-58.
College Basketball // 8 years ago
COL BKB: Georgetown 83, Virginia Commonwealth 80
D'Vauntes Smith-Rivera netted 26 points and sparked a second-half surge that sent Georgetown past No. 10 Virginia Commonwealth 83-80 Sunday in Puerto Rico.
College Basketball // 8 years ago
COL BKB: Oregon 82, Georgetown 75
Jonathan Loyd started a streak of seven free throws over the final minute Saturday that allowed No. 18 Oregon to hold off Georgetown 82-75.
College Basketball // 9 years ago
COL BKB: UCLA 82, Cal State-Northridge 56
Norman Powell led a balanced UCLA attack with 17 points Wednesday in the 24th-ranked Bruins' 82-56 victory over Cal State-Northridge.
Odd News // 9 years ago
Jockstrip: The world as we know it.
Naked man causes traffic delays ... Worker's comp rejected for coffee punch ... Boy, 9, raises more than $2K for Detroit ... Trojan distributes free vibrators in NYC ... The world as we know it from UPI.
Odd News // 9 years ago
Boy, 9, raises more than $2K for Detroit
A Detroit 9-year-old who set up a lemonade stand to benefit his struggling city presented an oversized check for $2,832.64 to officials, his father says.
U.S. News // 9 years ago
'Lemonade Kid' hits goal, helps Detroit
A 9-year-old businessman called the "Lemonade Kid" needed just three days to raise $1,000 to help his hometown of Detroit out of its financial crisis.

I don't want the flight attendants portrayed as a problem

Joshua Smith (1905-1995) was an Australian artist who won the Archibald Prize in 1944 with his portrait of Hon Sol Rosevear, MHR, Speaker of the Australian House of Representatives, but is more well known as being the subject of the previous years controversial Archibald Prize win, by artist William Dobell.

Although the portrait of him was very popular, with more than 154,000 visitors, a courtcase relating to the portrait in 1943 caused damage to his career, as well as that of Dobell's. At an interview in 1991 he called the portrait a "curse, a phantom that haunts me.It has torn at me every day of my life.I've tried to bury it inside me in the hope it would die, but it never does". The portrait of him by Dobell, had become more famous than his own work, which caused him considerable consternation.

FULL ARTICLE AT WIKIPEDIA.ORG
This article is licensed under the GNU Free Documentation License.
It uses material from the Wikipedia article "Joshua Smith."