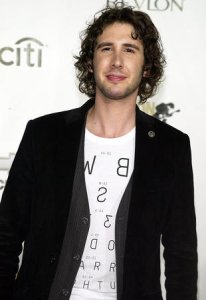 Entertainment News // 2 days ago
What to stream Thanksgiving weekend: 'Happiest Season,' Macy's parade
Kristen Stewart and Mackenzie Davis are keeping their relationship a secret in "Happiest Season," Macy's presents its annual Thanksgiving Day Parade and Dua Lipa is having a virtual concert this weekend.

TV // 2 weeks ago
Stars lining up for Thanksgiving TV specials
The casts of the shuttered Broadway shows "Hamilton," "Mean Girls," "Jagged Little Pill" and "Ain't Too Proud" will perform as part of this year's Macy's Thanksgiving Day Parade program.

TV // 6 months ago
'Disney Family Singalong, Vol. II' to air May 10
Ryan Seacrest is set to host a second edition of the star-studded "Disney Singalong" special.

Joshua Winslow "Josh" Groban (born February 27, 1981) is an American singer-songwriter, musician, actor, and record producer. His four solo albums have been certified at least multi-platinum, and in 2007, he was charted as the number one best selling artist in the United States with over 21 million records in this country. To date, he has sold over 24 million albums worldwide.

Groban originally studied acting but as his voice changed, it developed into a "significant instrument". The event that changed Groban's life was when his vocal coach, Seth Riggs, submitted a tape of Josh singing, "All I Ask of You", from The Phantom of the Opera, to Riggs' friend, renowned producer, composer and arranger David Foster. Foster called him to stand in for an ailing Andrea Bocelli to rehearse a duet, "The Prayer," with Celine Dion at the rehearsal for the Grammy Awards in 1998. Groban, being shy, reluctantly agreed. Rosie O'Donnell was so impressed that she immediately invited him to appear on her daytime talk show. He got another big break when Foster asked him to sing at the California Governor's Gray Davis' 1999 inauguration. His name and career soared with the public recognition he received, after being cast on Ally McBeal by the show's creator David E. Kelley, who asked him to perform "You're Still You" for the show's 2001 season finale.

Groban was born in Los Angeles to Lindy, a school teacher and full time mother, and Jack Groban, a businessman. His father is of Jewish background and a descendant of Russian and Polish immigrants. His mother is Norwegian American, the daughter of immigrants from the eastern Norwegian district of Toten. His parents joined the Episcopal Church after his father's conversion from Judaism to Christianity. Chris, his younger brother, shares the same birthday four years later.

FULL ARTICLE AT WIKIPEDIA.ORG
This article is licensed under the GNU Free Documentation License.
It uses material from the Wikipedia article "Josh Groban."
Back to Article
/