NFL // 2 years ago
Free-Agent Setup: Giants hope to keep OL together
It wasn't all that long ago that New York Giants Justin Pugh and Weston Richburg were thought to be two pieces of the offensive line's foundation. These days, however, the future of both offensive linemen being part of the 2018 team doesn't look promising. 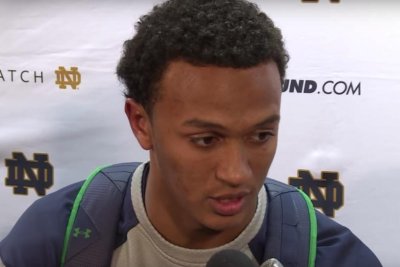 Joshua Charles Banks (born July 18, 1982 in Baltimore, Maryland) is a Major League Baseball starting pitcher for the San Diego Padres. He is 6'3" in height and weighs 195 pounds. Banks attended college at Florida International University. Tony Gwynn said Banks has eight pitches, one of which is a knuckleball.

He was selected by the Toronto Blue Jays in the second round of the June 2003 first-year player draft. On April 23, 2008, Banks was claimed off waivers by the San Diego Padres.

In his first 22 innings as a Padre, he did not give up any runs. This string was broken when David Wright singled home José Reyes on June 5, 2008. His first loss came weeks later against the New York Yankees and Joba Chamberlain on June 19, 2008. The loss was part of a three-game sweep of the Padres at Yankee Stadium, the last time the San Diego Padres will ever visit the old Yankee Stadium.

FULL ARTICLE AT WIKIPEDIA.ORG
This article is licensed under the GNU Free Documentation License.
It uses material from the Wikipedia article "Josh Banks."
Back to Article
/