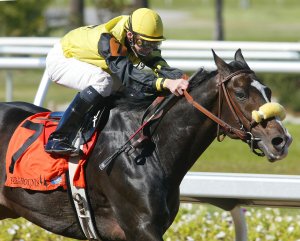 All I had to do was guide her in the right direction. I've never been on a horse with that kind of acceleration

Once he goes to the front in sprint races, his heart doesn't stop

Born and raised in Terrytown on the West Bank of the Mississippi River, within the Greater New Orleans Metropolitan area, Joe Talamo was influenced by a father who worked in horse racing as an assistant trainer. At age eleven, he began riding horses and worked as a stable boy. Like many successful Cajun jockeys before him, Talamo first raced at a bush track. His skills and desire was such that he decided to leave high school in order to pursue a professional riding career. He debuted at Louisiana Downs in June 2006 and went on to become the first apprentice jockey to win a riding title at the Fair Grounds Race Course in New Orleans.

In April 2007, Talamo moved to live in Playa del Rey, California from where he competes primarily at race tracks in the southern part of the state. He was the second leading jockey in wins during the Hollywood Park Racetrack 2007 Spring/Summer meet. For 2007, he notably earned five Grade I Graded stakes race wins and was voted the Eclipse Award as the 2007 United States Champion Apprentice Jockey.

FULL ARTICLE AT WIKIPEDIA.ORG
This article is licensed under the GNU Free Documentation License.
It uses material from the Wikipedia article "Joseph Talamo."
Back to Article
/