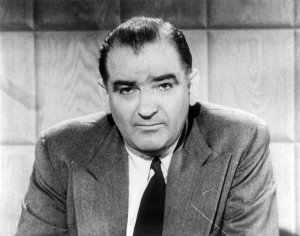 Top News // 5 years ago
The Almanac
On Dec. 2, 1961, Fidel Castro disclosed he was a communist, acknowledging he concealed the fact until he solidified his hold on Cuba.

Joseph Raymond McCarthy (November 14, 1908 – May 2, 1957) was an American politician who served as a Republican U.S. Senator from the state of Wisconsin from 1947 until his death in 1957. Beginning in 1950, McCarthy became the most visible public face of a period in which Cold War tensions fueled fears of widespread Communist subversion. He was noted for making claims that there were large numbers of Communists and Soviet spies and sympathizers inside the United States federal government and elsewhere. Ultimately, McCarthy's tactics and his inability to substantiate his claims led him to be censured by the United States Senate.

The term McCarthyism, coined in 1950 in reference to McCarthy's practices, was soon applied to similar anti-communist activities. Today the term is used more generally in reference to demagogic, reckless, and unsubstantiated accusations, as well as public attacks on the character or patriotism of political opponents.

Born and raised on a Wisconsin farm, McCarthy earned a law degree at Marquette University in 1935 and was elected as a circuit judge in 1939, the youngest in state history. At age 33, McCarthy volunteered for the United States Marine Corps and served during World War II. He successfully ran for the United States Senate in 1946, defeating Robert M. La Follette, Jr. After three largely undistinguished years in the Senate, McCarthy rose suddenly to national fame in February 1950 when he asserted in a speech that he had a list of "members of the Communist Party and members of a spy ring" who were employed in the State Department. McCarthy was never able to prove his sensational charge.

FULL ARTICLE AT WIKIPEDIA.ORG
This article is licensed under the GNU Free Documentation License.
It uses material from the Wikipedia article "Joseph R. McCarthy."