World News // 2 years ago
Non-profit group: Nearly 100 children dead in latest Ebola outbreak
Nearly 100 children have died of Ebola in the Democratic Republic of Congo recently in what's now documented as the second-worst spread of the deadly disease. 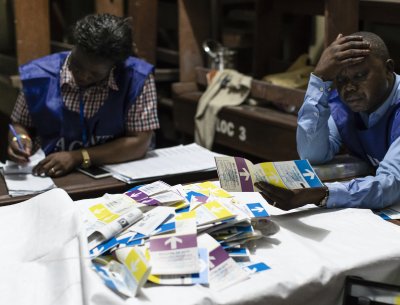 World News // 2 years ago
Congo voters cast ballots for new president after years of delays
The people of the Democratic Republic of Congo took to the polls to elect first new leader since 2001 amid delays caused by weather and technical difficulties.

World News // 2 years ago
Congo demands EU recall envoy over renewed sanctions
The Congolese government has demanded the European Union recall its envoy over new sanctions against 14 officials, including a candidate for president.

It's no longer an issue (of) what ... President Kabila is favoring

Joseph Kabila Kabange (known commonly as Joseph Kabila, born June 4, 1971) is a Congolese politician who has been President of the Democratic Republic of the Congo since January 2001. He took office ten days after the assassination of his father, President Laurent-Désiré Kabila. He was elected as President in 2006 and is standing for another term in the 2011 election.

Joseph Kabila Kabange was born on June 4, 1971 at Hewabora, a small village in the Fizi territory of the South Kivu province, in Eastern Congo. He is the son of long time rebel, former AFDL leader and president of the Congo Laurent-Désiré Kabila and Sifa Mahanya.

Following high school, Joseph Kabila followed a military curriculum in Tanzania, then at Makerere University in Uganda. In October 1996, Laurent-Désiré Kabila launched the campaign in Zaire to oust the Mobutu regime. Joseph became the commander of the infamous army of "kadogos" (child soldiers) and played a key role in major battles on the road to Kinshasa. The liberation army received logistical and military support from regional armies from Rwanda, Uganda, Angola and Zimbabwe. Following the AFDL's victory, and Laurent-Désiré Kabila's rise to the presidency, Joseph Kabila went on to get further training at the PLA National Defense University, in Beijing, China.

FULL ARTICLE AT WIKIPEDIA.ORG
This article is licensed under the GNU Free Documentation License.
It uses material from the Wikipedia article "Joseph Kabila."
Back to Article
/