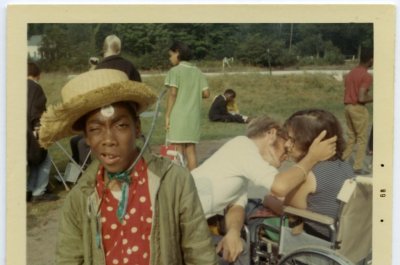 Movies // 10 months ago
'Crip Camp' subjects have become disability rights activists
"Crip Camp: A Disability Revolution" directors Jim Lebrecht and Nicole Newnham look back on Camp Jenet for campers with disabilities and the campers who became involved with the Americans with Disabilities Act.
Business News // 1 decade ago
Loews Corp. spins off tobacco firm
The Loews Corp. has spun off its profitable Lorillard, exposing the Greensboro, N.C., tobacco company to a takeover, analysts said.
Health News // 1 decade ago
'Swish-and-spit' test for some cancers
A morning gargle -- or swish and spit test -- could someday be used to spot head and neck cancers, U.S. scientists said.
Top News // 1 decade ago
Survey: parents unaware of teen drugs
The National Center on Addiction and Substance Abuse at New York's Columbia University says when it comes to teens' drugs and drinking, many parents are dumb.
Science News // 1 decade ago
Study: Regulate alcohol marketing
The U.S. alcohol industry snares too many underage drinkers and its marketing practices should be federally regulated, a Columbia University study concludes.
Science News // 1 decade ago
Medicare: A political battle, then and now
To understand the Medicare debate you need to look at the senior health insurance system as it came into being on July 30, 1965. Then, as now, it was a huge government entitlement forged through arduous compromise and old-fashioned political maneuvering.
Science News // 1 decade ago
Teen risk factors for substance abuse
More than half of teens are at risk for substance abuse if they have one of three risk factors: stress, boredom or too much money.
Science News // 1 decade ago
Teens drink 20 percent of U.S. alcohol
Teens and adults who drink heavily account for more than half of all alcohol consumption in the United States, with teens alone accounting for nearly 20 percent, even though they're not legally allowed to drink, a study released Tuesday said.
Business News // 1 decade ago
Recent Research Suggests...
In late February, Carter-era Health Secretary Joseph Califano caused a stir when his National Center on Addiction and Substance Abuse (CASA), which is affiliated with Columbia University, claimed that underage drinkers account for 25 percent of all alcoho
Business News // 1 decade ago
Recent research suggests...
This column examines the facts behind recent statistical studies that have made the news but been misinterpreted, failed to make the news for some reason or are just plain weird.

Baby boomer parents may be surprised that hefty amounts of spending money can mean trouble. People tend to think of substance-abusing kids as likely to be in poor, urban America

Joseph Anthony Califano, Jr. (born May 15, 1931) is as of 2009 the Chairman of the National Center on Addiction and Substance Abuse (CASA) at Columbia University. He has held many posts in the United States Government including United States Secretary of Health, Education, and Welfare from 1977 until 1979. He is now one of only two living former secretaries of Health, Education, and Welfare (the other is his predecessor, Forest David Mathews).

FULL ARTICLE AT WIKIPEDIA.ORG
This article is licensed under the GNU Free Documentation License.
It uses material from the Wikipedia article "Joseph Califano."
Back to Article
/