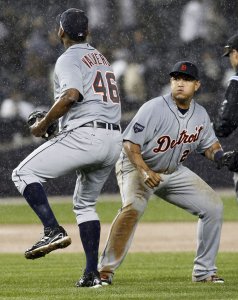 José Rafael Valverde (born March 24, 1978 in San Pedro de Macoris, Dominican Republic) is a Dominican baseball relief pitcher for the Detroit Tigers of Major League Baseball. His nickname is Papa Grande (Spanish for Big Potato). He throws both two and four-seam fastballs, a splitter, and a slider. Both of his fastballs are thrown in the mid to high nineties. His splitter is probably known as his best and most effective pitch.

Valverde made his Major League Baseball debut in 2003 to help out the injury plagued Arizona Diamondbacks, joining Brandon Webb and Andrew Good after injuries to Randy Johnson and Curt Schilling left the team out of contention.

Although he had been the Diamondbacks closer since replacing Brian Bruney in 2005, trouble on the mound in the month of June 2006 forced management to give the role to Jorge Julio. Valverde regained the role after spending some time with the Diamondbacks Triple-A affiliate, the Tucson Sidewinders. He returned to the closer role in early September (as Julio became too inconsistent) and pitched well in his return. Valverde finished the 2006 season with a record of two wins, three losses, an ERA of 5.84 and 18 saves.

FULL ARTICLE AT WIKIPEDIA.ORG
This article is licensed under the GNU Free Documentation License.
It uses material from the Wikipedia article "Jose Valverde."
Back to Article
/