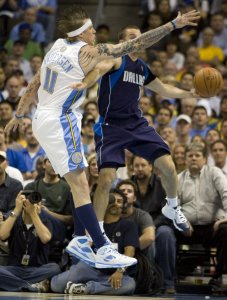 José Juan "J.J." Barea (born June 26, 1984) is a Puerto Rican professional basketball player. He currently plays as a point guard for the National Basketball Association (NBA)'s Dallas Mavericks. Barea has played in the NBA, NBA Development League, NCAA and the BSN with Indios de Mayagüez and the Cangrejeros de Santurce. He participated in the 2006 NBA Draft but was undrafted, and he was subsequently signed by the Dallas Mavericks following his participation in the NBA Vegas Summer league, becoming the seventh Puerto Rican to play in the NBA. He was a member of the Puerto Rican team that won the gold medal in the 2006 and 2010 Central American and Caribbean Games. Barea was the starting point guard of the Puerto Rican national team's second squad that won the silver medal in the 2007 Pan American Games.

Jose Juan Barea is the son of Jaime Barea and Marta Mora. He was born and raised in Mayagüez where he lived until he was seventeen. While living in Mayagüez, Barea was a member of Boy Scouts of America Troop 790 for seven years. He then moved to Miami, Florida after joining the Miami Tropics program, organized by Arturo Álvarez and Miguel Mercado. As part of the program, Barea enrolled at Miami Christian School, where he played his senior high school year with the school’s team. During this season the team won the Class 1A state title, Barea averaged 24.8 points per game, and was selected to Florida’s All-State team and was Miami-Dade’s Player of the Year.

Barea was a four-year letterman at Northeastern University from 2003–2006. In 2005 and 2006, as a junior and senior, he was named a finalist for the Bob Cousy Award, given to the nation's best point guard. Barea was selected to the All-America East First Team twice. Northeastern switched to the Colonial Athletic Association for his senior campaign and he earned All-CAA First Team honors. Barea finished his career as the school's second all-time leading scorer with 2,209 points behind Reggie Lewis. He also left Northeastern as its second all-time leader in assists (721) and leader in three-point field goals made (255).

FULL ARTICLE AT WIKIPEDIA.ORG
This article is licensed under the GNU Free Documentation License.
It uses material from the Wikipedia article "Jose Juan Barea."