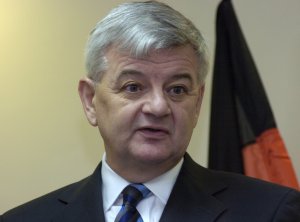 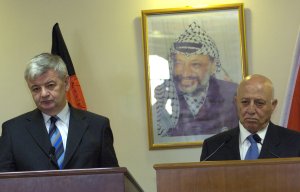 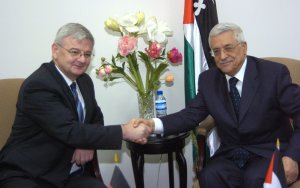 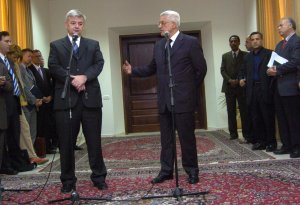 World News // 9 years ago
CIA: Learned too late informant was liar
Former CIA Director George Tenet made incredible claims regarding an Iraqi who played a key role in the decision to invade Iraq, a former German official said.
Special Reports // 9 years ago
Next Cold War heated with natural gas?
Russia launched the South Stream pipeline not for energy reasons but to pull Ukraine eastward, a strategy that could spark a Cold War-like conflict between Europe and Russia, former German Foreign Minister Joschka Fischer has warned.
Energy News // 9 years ago
Russian experts blast Nabucco
Russian experts strongly refuted claims by former German Foreign Minister Joschka Fischer that the Russian-launched South Stream pipeline is a purely political project that doesn't make economic sense.
Energy News // 1 decade ago
Nabucco is about a new Europe -- adviser
The Nabucco natural gas pipeline for Europe is indicative of new developments in the region amid a sea change in energy diplomacy, officials said.
Energy News // 1 decade ago
German ex-FM Fischer to promote Nabucco
Former German Foreign Minister Joschka Fischer has been hired to lobby for the EU gas pipeline Nabucco.
Business News // 1 decade ago
Germany accused of isolationism
A former German foreign minister said Germany's response to the current world financial crisis was too isolationist.
Top News // 1 decade ago
Israel marks 60th anniversary
Military flyovers, bunting and pioneers recalling the founding of Israel marked the country's 60th anniversary celebration Thursday.
Business News // 1 decade ago
Germany selling two new subs to Israel
Germany is selling Israel two new Dolphin class submarines for a total of $1.17 billion, Deutsche Welle reported Monday.
Top News // 1 decade ago
Schroeder worried over Iranian hostility
Germany's Chancellor Gerhard Schroeder said he is "worried about the increasingly hostile course" of the new Iranian government on nuclear proliferation.
Top News // 1 decade ago
FMs fail to reach accord on U.N. council
Four foreign ministers of the "G4" countries seeking permanent U.N. Security Council seats have taken their campaign to U.N. World Headquarters in New York.
Top News // 1 decade ago
Panel to study Nazi foreign ministry
A five-member historians' panel in Germany, which includes an Israeli and an American, will study the role of the German foreign ministry during the Nazi era.
Top News // 1 decade ago
U.S. cool on Germany on Security Council
The Bush administration has refused to give its endorsement to Germany gaining a permanent seat on an expanded U.N. Security Council.
Top News // 1 decade ago
U.S. appears to back IAEA chief
The Bush administration appeared Wednesday to drop its opposition to Mohammed ElBaradei's bid for a third term as head of the U.N. nuclear watchdog agency.
Top News // 1 decade ago
Fischer calls U.S. ties 'family'
For Germany, Russia may be a partner but the United States is "family" Foreign Minister Joschka Fischer claimed Friday. "Russia is our partner, the U.S. is our friend and most important ally outside of Europe. One is a partnership; the other is family,"
Top News // 1 decade ago
U.N. inspectors voice Iran weapons fears
United Nations inspectors have told the BBC Iran may be developing nuclear weapons. In a documentary to be broadcast Tuesday night, U.N. Inspector Chris Charlier said the dismantling of a nuclear facility at Natanz raised suspicions the Iranians were tryi

Russia is our partner, the U.S. is our friend and most important ally outside of Europe. One is a partnership; the other is family

I did not react with sufficient speed or firmness, or fully enough as the responsible minister

We expect that the International Atomic Energy Agency will confirm at the meeting of the IAEA board of governors on Nov. 25, and in future further monitor, the voluntary suspension of all enrichment and reprocessing activities by Iran

Joseph Martin "Joschka" Fischer (born April 12, 1948) is a German politician of the Alliance '90/The Greens. He served as Foreign Minister and Vice Chancellor of Germany in the cabinet of Gerhard Schröder from 1998 to 2005. Fischer has been a leading figure in the West German Greens since the 1970s, and according to opinion polls, he was the most popular politician in Germany for most of the government's duration. Following the September 2005 election, in which the Schröder government was defeated, he left office on November 22, 2005.

Fischer was born in Gerabronn in Baden-Württemberg, the third child of a butcher, whose family had lived in Hungary for several generations, but had to leave the country in 1946 after Hungary was occupied by the Soviet Union, and ethnic Germans were persecuted by the Hungarian authorities and expelled from the country. His nickname Joschka is derived from the Hungarian Jóska, diminutive of Joseph (Hungarian József). Fischer dropped out of high school in 1965, and started an apprenticeship as a photographer which he quit in 1966. Because Fischer lacks a school-leaving certificate, he never attended a university or a college. He did not do either compulsory military service or the alternative civilian service for conscientous objectors due to failing his physical examinations because of poor eyesight.

In 1967 he became active in the German student movement and left-wing movement (post-) 1968 (the so-called Spontis), first in Stuttgart and after 1968 in Frankfurt am Main. Later Fischer had several unskilled worker jobs, among others in a left-wing bookstore in Frankfurt. During this period he began attending leftist university events as a guest, such as the lectures, de rigueur for revolutionary students, of Theodor W. Adorno, Jürgen Habermas and Oskar Negt. He studied the works of Marx, Mao and Hegel and became a member of the militant group Revolutionärer Kampf (Revolutionary Struggle). Fischer was a leader in several street battles fought by the radical Putzgruppe (literally "cleaning squad", with the first syllable being interpreted as an acronym for Proletarische Union für Terror und Zerstörung, "Proletarian Union for Terror and Destruction") which physically attacked a number of police officers. Photos of one such battle in March 1973, which were later to haunt him, show him clubbing policeman Rainer Marx, to whom he later publicly apologized.

FULL ARTICLE AT WIKIPEDIA.ORG
This article is licensed under the GNU Free Documentation License.
It uses material from the Wikipedia article "Joschka Fischer."
Back to Article
/