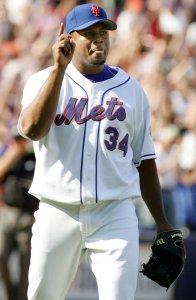 I never tried to hit this guy on the face or the head or wherever. I am (appealing) because it's just not true. I just tried to throw inside. That's what happened. That's a lot of games. You can't feel good about it because it's four games. I don't feel good because (pitching) is my job

Jorge Dandys Julio Tapia (born March 3, 1979, in Caracas, Venezuela) is a Major League Baseball relief pitcher who is currently a free agent. He previously played for the Baltimore Orioles from 2001–2005, New York Mets and Arizona Diamondbacks in 2006, and the Florida Marlins in 2007 before being traded to the Rockies for Byung-Hyun Kim. He had brief stints with the Cleveland Indians and Atlanta Braves in 2008. He bats and throws right-handed.

Julio, who throws extremely hard, features both a four-seam and a two-seam fastball in the 95–100 MPH range and has thrown even harder on occasion. He also has a downward-breaking slider, which comes in at between 86-90 MPH, and occasionally throws a changeup as well.

Julio's first season in the majors was 2001 with the Orioles, in which he compiled a record of 1 win and 1 loss with a 3.80 ERA in 21.1 innings pitched; however, Julio's first full season in the majors was 2002, in which he went 5–6, posting a 1.99 ERA with 25 saves and 55 strikeouts in 68 innings. He finished third in the American League Rookie of the Year voting with 1 second-place vote and 11 third-place votes. However, he was unable to duplicate his rookie season success in the seasons that followed and eventually lost his job as the Orioles closer to B. J. Ryan at the end of 2004. Julio began 2005 as the set-up man for Ryan. During April of that season, he allowed just one earned run in 12 ⅔ innings pitched; despite that, his performance declined and he finished the season 3–5 with a 5.90 ERA in 67 appearances.

FULL ARTICLE AT WIKIPEDIA.ORG
This article is licensed under the GNU Free Documentation License.
It uses material from the Wikipedia article "Jorge Julio."
Back to Article
/