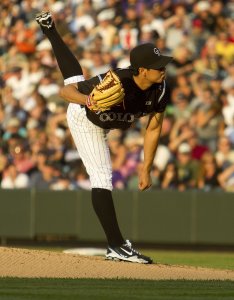 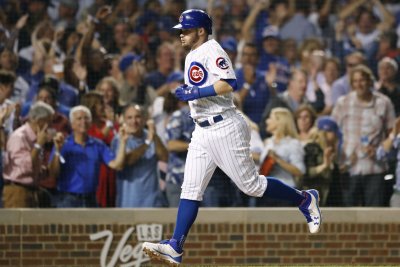 MLB // 2 years ago
Chicago Cubs move forward against Cincinnati Reds without injured closer
CHICAGO -- The Chicago Cubs have a razor-thin margin for error as they attempt to hold onto first place in the National League Central down the stretch.

MLB // 2 years ago
Mets ballboy makes incredible diving catch in foul territory
Baseball legend Keith Hernandez was on hand to analyze a terrific diving catch by a ballboy during a New York Mets win against the Arizona Diamondbacks.

MLB // 3 years ago
Arizona Diamondbacks beat New York Mets on Chris Herrmann's homer in 11th inning
Matt Harvey gave the New York Mets a chance to win. But the end result was all the same.

MLB // 3 years ago
Arizona Diamondbacks' six-run 8th sends New York Mets to fifth straight loss
PHOENIX -- Down an integral part of their lineup, the Arizona Diamondbacks didn't miss a beat Monday night. It just took until the eighth inning for their offense to fire up, the way it has so often at home this season.

De La Rosa was signed as an amateur free agent by the Arizona Diamondbacks in 1998. He was purchased by the Monterrey Sultanes of the Mexican League prior to the 2000 season. The Boston Red Sox purchased de la Rosa from Monterrey prior to the 2001 season.

In November 2003 season, the Red Sox traded de la Rosa with Casey Fossum, Brandon Lyon and Michael Goss to the Diamondbacks for Curt Schilling. The Diamondbacks traded him in December 2003 with Chris Capuano, Craig Counsell, Chad Moeller, Lyle Overbay and Junior Spivey to the Milwaukee Brewers for a Richie Sexson, Shane Nance and player to be named later (minor leaguer Noochie Varner).

FULL ARTICLE AT WIKIPEDIA.ORG
This article is licensed under the GNU Free Documentation License.
It uses material from the Wikipedia article "Jorge De La Rosa."
Back to Article
/