NHL // 4 years ago
Chicago Blackhawks defeat Columbus Blue Jackets for 50th win
CHICAGO -- Chicago Blackhawks right winger Marian Hossa is grateful that he does not have to face Corey Crawford in the opposing net. 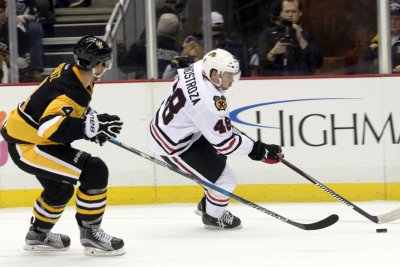 NHL // 4 years ago
Penguins vs. Blackhawks preview: Can Pittsburgh rebound against NHL's hottest team?
CHICAGO -- The Pittsburgh Penguins coughed up a late lead Tuesday night, which likely won't put them in the best of moods heading into a Wednesday test against the NHL's hottest team.

NHL // 4 years ago
Chicago Blackhawks stop slide against Winnipeg Jets
WINNIPEG, Manitoba -- Brent Seabrook has been an elite defenseman in the NHL for more than a decade but it was his goaltending skills that were front and center as the Chicago Blackhawks defeated the Winnipeg Jets 5-2 Friday night at the MTS Centre.

Jordin John Kudluk Tootoo (Inuktitut: ᔪᐊᑕᓐ ᔮᓐ ᑲᑦᓗᒃ ᑐᑐ; born February 2, 1983) is a Canadian professional ice hockey player with the Nashville Predators of the National Hockey League (NHL). He is the first player of Inuit descent to play in the NHL.

Tootoo played Bantam AA hockey in Spruce Grove, Alberta. The Brandon Wheat Kings selected him in the 3rd round of the 1998 WHL Bantam Draft. Tootoo played for the Wheat Kings in the Western Hockey League (WHL) from 1999 to 2003 and was selected 98th overall in the 2001 NHL Entry Draft as the sixth choice of the Nashville Predators. He became the first player of Inuit descent to play in a regular season NHL game when he suited up against the Anaheim Ducks on Opening Night October 9, 2003. He was also the first person of Inuit descent to be drafted by an NHL team. Tootoo wears the number '22' as a play on words of his name.

FULL ARTICLE AT WIKIPEDIA.ORG
This article is licensed under the GNU Free Documentation License.
It uses material from the Wikipedia article "Jordin Tootoo."
Back to Article
/