College Football // 3 years ago
Louisville Cardinals 2017 season preview, schedule, players to watch
Louisville went 9-4 last season with a win over Florida State, and quarterback Lamar Jackson won the Heisman Trophy. And yet it didn't quite seem like enough. 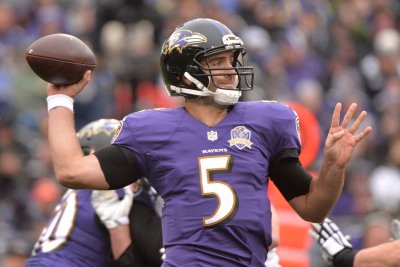 It means that (family members, team officials and current and former Ravens' players) appreciate what I brought to the organization

I'm feeling all right right now, it's just a sprained MCL. Hopefully it responds well and I'll be back next week

He received his education at St. Albans School, excelling not only in football but also in track and field. An All-American in both sports, he decided on UCLA instead of the University of Florida because UCLA would let him participate in track and field. A legitimate Olympic level shot-putter, he won the 1996 NCAA indoor track title in the shot put. He had an outstanding career with the UCLA Bruins, starting as left tackle for four years. In 23 games during his junior and senior years, he allowed just two sacks. In 1995, Ogden received the Outland Trophy and the Morris Trophy, was the UPI Lineman of the Year, and was a unanimous 1st-team All-American.

Ogden eventually had his jersey (#79) retired - only the eighth player in Bruins' history to receive that honor.

FULL ARTICLE AT WIKIPEDIA.ORG
This article is licensed under the GNU Free Documentation License.
It uses material from the Wikipedia article "Jonathan Ogden."
Back to Article
/