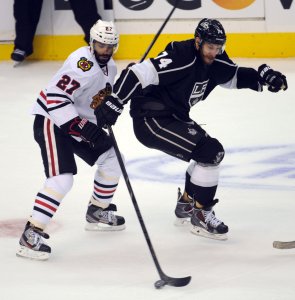 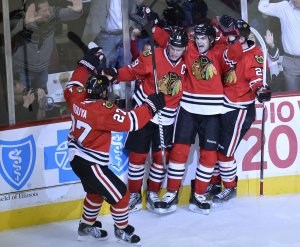 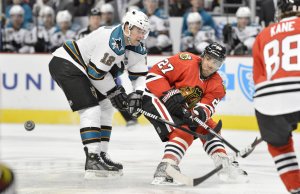 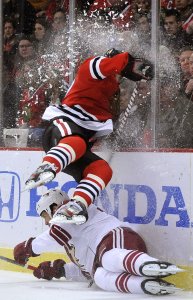 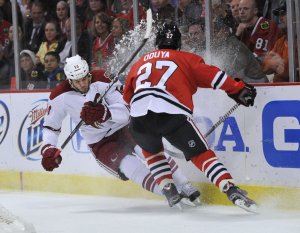 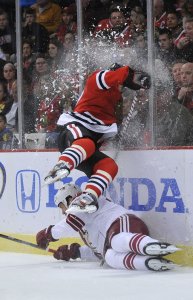 NHL // 4 years ago
Chicago Blackhawks defeat Columbus Blue Jackets for 50th win
CHICAGO -- Chicago Blackhawks right winger Marian Hossa is grateful that he does not have to face Corey Crawford in the opposing net.

NHL // 4 years ago
NHL roundup: recap, scores, notes for every game played on March 14
WASHINGTON -- Alexander Ovechkin ended a 10-game scoreless drought with a second-period goal and the Washington Capitals halted their four-game losing streak Tuesday night with a 4-2 win over the Minnesota Wild in a battle of conference leaders.

NHL // 4 years ago
Penguins vs. Blackhawks preview: Can Pittsburgh rebound against NHL's hottest team?
CHICAGO -- The Pittsburgh Penguins coughed up a late lead Tuesday night, which likely won't put them in the best of moods heading into a Wednesday test against the NHL's hottest team.

NHL // 5 years ago
Chicago Blackhawks-St. Louis Blues: NHL playoff preview and who will win series
Key Matchup, X-factor, and Prediction on who will win the series

Oduya is primarily a gritty and aggressive defenceman, although he has shown some offensive skills.

Oduya's first club was Hammarby IF, where he played as a junior. In 2000, at the age of 19, he moved to North America to play in the Quebec Major Junior Hockey League. He spent one season in North America, splitting time between Victoriaville Tigres and Moncton Wildcats. After moving back to Sweden, he signed a contract with Djurgårdens IF in the Swedish Elitserien. During the two seasons he spent with the team, he was known as an aggressive defenceman and a tough guy. At times he fought with opposition players and received loads of penalty minutes. However, he was also a very dependable player and played regularly in the Swedish national team during the Euro Hockey Tour. In the 2005–06 season, after he had been dismissed by the NHL team Washington Capitals, he moved to another Swedish team, Frölunda HC. In Frölunda, he played as a more offensive defenceman, scoring eight goals and eleven assists.

FULL ARTICLE AT WIKIPEDIA.ORG
This article is licensed under the GNU Free Documentation License.
It uses material from the Wikipedia article "Johnny Oduya."