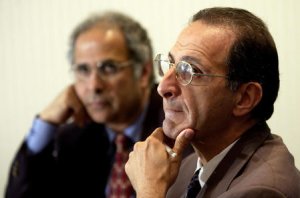 Health News // 3 months ago
Survey reinforces Americans' apprehension about rushed COVID-19 vaccine
Nearly 40% of Americans say they won't get vaccinated against COVID-19 even if a shot becomes available, according to a survey released Friday by consulting firm Children's Health Defense.
U.S. News // 9 years ago
Pollster: Kennedy name not what it was
Joseph P. Kennedy III will not have a cakewalk if he decides to run for a Massachusetts congressional seat, a pollster says.
U.S. News // 1 decade ago
Poll: N.J. Gov. Christie viable candidate
New Jersey Gov. Chris Christie leads among 2012 GOP presidential hopefuls and is the only Republican who tops President Obama among all voters, Zogby said.
U.S. News // 1 decade ago
Poll: Obama ties his previous low rating
Poll results released Tuesday indicate President Barack Obama's approval ratings have dropped to 39 percent, tying his previous low since becoming president.
U.S. News // 1 decade ago
Poll: No compromise seen if GOP wins
Voters see Republicans as unlikely to compromise with the Obama administration if they reclaim either the U.S. House or Senate, a Zogby Poll indicated.
Business News // 1 decade ago
Voters see clean energy and economy linked
A majority of U.S. voters in a post-election survey indicated they agreed clean energy initiatives were important to helping the economy, researchers said.
Issue of the Day // 1 decade ago
Analysis: The end of boomer power
Barack Obama's primary race victory over Hillary Clinton has already had one profound effect on American politics and society: For the first time in 16 years, the United States will not be ruled by a post-World War II early "baby boom" generation president born in the mid-1940s.
Top News // 1 decade ago
Claim: Democratic race helps McCain
The intense rivalry between Democratic presidential hopefuls is being accompanied by growing popularity for the presumptive GOP nominee, U.S. pollsters say.
Top News // 1 decade ago
Poll: East Texas key for Obama, Clinton
A tracking poll indicates eastern Texas will be key for U.S. Sens. Barack Obama and Hillary Clinton in the state's Democratic presidential primary Tuesday.
Top News // 1 decade ago
Pollsters poll poor performance
Pollsters struggled to explain how they failed to predict presidential candidate U.S. Sen. Hillary Clinton's win in the New Hampshire primary.

Support for action on global warming, already strong in the 2006 election, was even stronger in 2008, particularly among young voters that are the future electorate

It's been a bad couple of weeks for the Democrats, with Obama and Hillary continuing to snipe at each other, beginning the process of a thousand cuts

The problem for the President is that the country is badly split over the war, and those who oppose it are unlikely to change their minds because of a single development

John Zogby (born 1948) is an American political pollster and first senior fellow at The Catholic University of America's Life Cycle Institute. He is the founder, president and CEO of Zogby International, a polling firm known for both phone polling and interactive, Internet-based polling.

Zogby grew up in Utica, New York, the son of Lebanese Catholic immigrants. His brother, James Zogby, is the founder of the Arab American Institute, and is also employed by Zogby International.

FULL ARTICLE AT WIKIPEDIA.ORG
This article is licensed under the GNU Free Documentation License.
It uses material from the Wikipedia article "John Zogby."
Back to Article
/