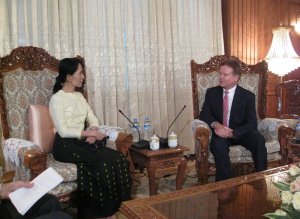 Top News // 1 year ago
On This Day: Ecuador grants asylum to Julian Assange
On Aug. 16, 2012, the Ecuadorean government said it was granting political asylum in its London Embassy to WikiLeaks founder Julian Assange.

Top News // 1 year ago
The Almanac
On Aug. 16, 2012, the Ecuadorean government said it was granting political asylum in its London Embassy to WikiLeaks founder Julian Assange.

On 4 May 2009, the American citizen John Yettaw trespassed upon the residence of Burmese political prisoner Aung San Suu Kyi, two weeks before her scheduled release from house arrest on May 27. This illegal visit prompted Suu Kyi's arrest on May 13, 2009. Yettaw himself was arrested by Myanmar authorities on May 6. He was charged on May 14 with illegally entering a restricted zone, illegal swimming and breaking immigration laws. It is illegal in Myanmar to have a guest stay overnight at one's home without notifying the authorities first.

Myanmar authorities asserted that Yettaw's visits were instigated by opposition groups as part of efforts to pressure and embarrass the Myanmar government. International organizations and nations sympathetic to her cause said the charges against Suu Kyi were a ruse to extend her detention beyond the 2010 scheduled elections.

FULL ARTICLE AT WIKIPEDIA.ORG
This article is licensed under the GNU Free Documentation License.
It uses material from the Wikipedia article "John Yettaw."