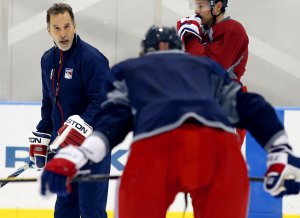 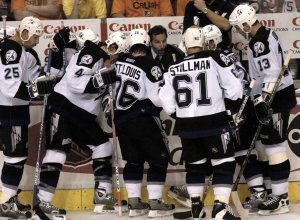 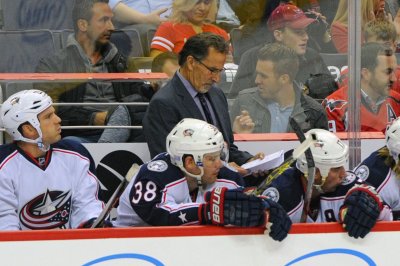 NHL // 2 years ago
Blue Jackets, Devils to get acquainted
COLUMBUS, Ohio -- The Columbus Blue Jackets and New Jersey Devils will get familiar with one another over the next four days.

NHL // 2 years ago
Blue Jackets look for home-ice edge vs. Canucks
COLUMBUS, Ohio -- For some reason, the Columbus Blue Jackets aren't feeling at home in their own arena.

To do it in three years, to get where we're at today, who is kidding who

The way Stevens played tonight, it didn't surprise me how well he played

Jonathan "John" Tortorella (born June 24, 1958) is an American professional ice hockey coach and is now the head coach of the New York Rangers of the National Hockey League (NHL). He is perhaps best known for his tenure as head coach of the Tampa Bay Lightning, where he led the team to the 2004 Stanley Cup. Tortorella became head coach of the Lightning on June 6, 2001 and stayed on until his firing on June 3, 2008 after six and a half seasons, having compiled a 239-222-36-38 record. The firing took place four years after the team's Stanley Cup victory.

Tortorella has been credited by East Coast Hockey League founders Henry Brabham and Bill Coffey with coming up with the name for the league during a league meeting at a Ramada Inn in Winston-Salem, North Carolina. At the time Tortorella was the head coach of Brabham's Virginia Lancers, but left the Lancers to become the assistant coach of the American Hockey League's New Haven Nighthawks before the ECHL's inaugural season in 1988.

Tortorella went to Concord Carlise High School & is on the athletic Hall Of Fame Wall (1976). John's brother Jim Tortorella is also listed on the wall.

FULL ARTICLE AT WIKIPEDIA.ORG
This article is licensed under the GNU Free Documentation License.
It uses material from the Wikipedia article "John Tortorella."
Back to Article
/