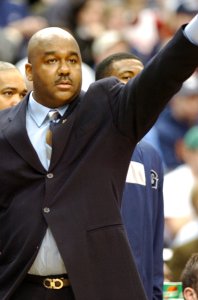 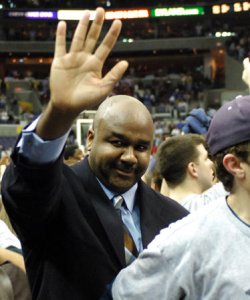 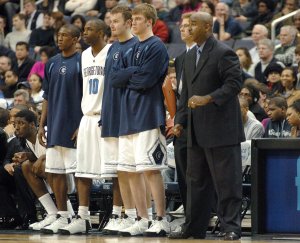 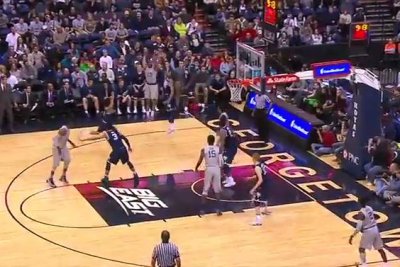 College Basketball // 4 years ago
No. 2 Villanova dominates reeling Georgetown
WASHINGTON, D.C. -- Some might suggest telling a lie in the nation's capital is the norm. Josh Hart's fib following the final regular season game in his hometown won't lead to scandal.

College Basketball // 4 years ago
Marcus Foster powers No. 20 Creighton past Georgetown
OMAHA, Neb. -- Creighton avenged its biggest defeat of the season Sunday with an 87-70 Big East Conference victory over Georgetown.

We appreciate the hard work he put in at Georgetown, both on and off the floor

After careful deliberation, I have decided that it is time to make a change in leadership in our men's basketball program

John Thompson III (born March 12, 1966) is the current head coach of the men's basketball team at Georgetown University. He grew up in Washington, D.C. and was named first team All-Metro by The Washington Post while playing for Gonzaga College High School in 1984. Thompson was hired on April 20, 2004 to replace Craig Esherick. Prior to being hired at Georgetown, Thompson was the head coach for four years at his alma mater, Princeton University.

Thompson is the son of John Thompson, Jr. (Georgetown's head coach from 1972 to 1999), and a 1988 graduate of Princeton. Thompson, whose nickname is JT3, served as an assistant coach at Princeton under head coaches Pete Carril and Bill Carmody from 1995 through 2000. After being promoted to head coach, he compiled a 68–42 record with the Tigers from 2000 to 2004 and guided the team to three Ivy League championships, two NCAA tournament appearances, and one NIT tournament appearance. Three of his players earned Ivy League Player of the Year honors.

Thompson immediately introduced the Princeton offense at Georgetown, a style of play that he learned from coach Pete Carril at Princeton. The rarity of this style, and Thompson's success at adapting it to work with the brawnier Georgetown players, has been cited by the Washington Post as one of the major reasons for the team's quick turnaround. In Thompson's first year at Georgetown (2004–05), the Hoyas improved from 13–15 to a record of 19–13 and the team reached the quarterfinals of the NIT.

FULL ARTICLE AT WIKIPEDIA.ORG
This article is licensed under the GNU Free Documentation License.
It uses material from the Wikipedia article "John Thompson III."
Back to Article
/