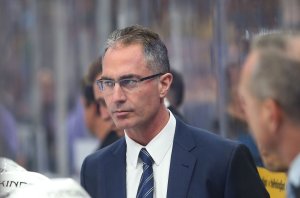 NHL // 2 years ago
Hurricanes, Williams visit struggling Kings
Justin Williams helped the Los Angeles Kings win their only two Stanley Cup titles in franchise history. He's spent the past three seasons reminding the organization what a good player they had.

NHL // 2 years ago
Blues bid to get back on track against Predators
Last February, the beginning of the end for Mike Yeo unfurled in Nashville, although no one suspected it at the time.

NHL // 2 years ago
Wild getting offense from defense, take on Kings
The Minnesota Wild are getting the type of offense from their defensemen that Los Angeles Kings interim coach Willie Desjardins hopes to see from his new team.

NFL // 2 years ago
Flyers, Kings try to keep momentum from big wins
After struggling to build momentum in October, the Los Angeles Kings and Philadelphia Flyers capped off the month with emotional victories. 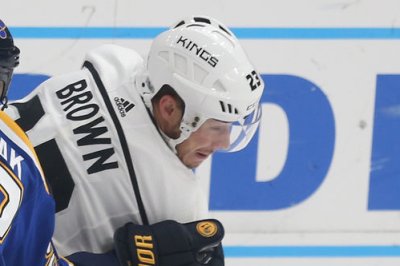 NHL // 2 years ago
Kings hope to halt six-game skid in matchup with Rangers
The Los Angeles Kings will try to avoid their longest losing streak in nearly 11 years when they begin a seven-game homestand against the New York Rangers on Sunday afternoon at Staples Center.

NHL // 3 years ago
Los Angeles Kings beat St. Louis Blues, win fourth consecutive game
Serving as the backup goalie to Jonathan Quick, Darcy Kuemper knows he is going to get only limited opportunities to play for the Los Angeles Kings.

John Arthur Stevens, Baron Stevens of Kirkwhelpington KStJ QPM DL FRSA (born 21 October 1942) was Commissioner of Police of the Metropolis (head of the Metropolitan Police Service) from 2000 until 2005. From 1991 to 1996, he was Chief Constable of Northumbria Police before being appointed one of HM Inspectors of Constabulary in September 1996. He was then appointed Deputy Commissioner of the Met in 1998 until his promotion to Commissioner in 2000.

FULL ARTICLE AT WIKIPEDIA.ORG
This article is licensed under the GNU Free Documentation License.
It uses material from the Wikipedia article "John Stevens."
Back to Article
/