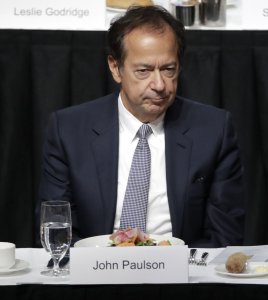 Opinion // 4 years ago
Steve Mnuchin, Trump's treasury secretary pick, is a lucky man
Steven Mnuchin has made a career out of being lucky.

U.S. News // 5 years ago
Hedge-fund manager John Paulson makes record $400 million donation to Harvard
Billionaire hedge-fund manager John A. Paulson donated a $400 million endowment to Harvard's School of Engineering and Applied Science.
World News // 7 years ago
Puerto Rico poised as 'Singapore of the Caribbean'
Prominent investment firm director John Paulson said the island of Puerto Rico is about to become the “Singapore of the Caribbean."
Business News // 7 years ago
Steinway to sell itself to Paulson & Co. for $512 million
U.S. piano maker Steinway Musical Instruments said Wednesday it has agreed to sell itself to Paulson & Co., an investment fund, for $512 million.
U.S. News // 8 years ago
Central Park getting $100 million gift
A New York billionaire is giving $100 million to an organization that manages the city's famous Central Park, city officials say.
U.S. News // 9 years ago
Romney leads race for billionaire funds
In the race for campaign donations from the wealthy, Republican presidential hopeful Mitt Romney leads U.S. President Barack Obama, a review indicates.
U.S. News // 9 years ago
Romney chides Obama for '4-4-4' plan
Republican U.S. presidential candidate Mitt Romney joked Wednesday that President Obama's economic plan could be summed up as a 4-4-4 strategy.
U.S. News // 9 years ago
Occupy arrests in Boston, Washington
Police arrested more than 100 protesters Tuesday in Washington and Boston as Republican and Democratic politicians split on support of the Occupy rallies.
Business News // 1 decade ago
Goldman Sachs as a morality tale
A New Jersey HVAC repairman who lost his home to foreclosure in 2008 bestowed his blessing on the hedge fund manager at the center of a major fraud case.

Paulson was born in Queens, New York, the son of Jacqueline and Alfred Paulson, a chief financial officer for Ruder Finn. Paulson attended the Whitestone Hebrew Centre (a United Synagogue of Conservative Judaism school) in Queens. He received his bachelor's degree in finance from New York University’s College of Business and Public Administration (now called NYU Stern School), where he graduated first in his class. He earned his MBA from Harvard Business School, where he was designated a Baker Scholar, the school's top academic honor, for graduating in the top 5 percent. Paulson began his career at Boston Consulting Group before leaving to join Odyssey Partners, working under Leon Levy. He later worked in the mergers and acquisitions group at Bear Stearns. Prior to founding his own firm, he was a partner at mergers arbitrage firm Gruss Partners LP. In 1994, he founded his own hedge fund with $2 million and two employees (himself and an assistant).

Paulson & Co., Inc. had assets under management (as of June 1, 2007) of $12.5 billion (95% from institutions), which leapt to $36 billion as of November 2008.In 2007 alone he made $15 billion for his firm. Under his direction, Paulson & Co has capitalized on the problems in the foreclosure and mortgage backed securities (MBS) markets. In 2008 he decided to start a new fund that would capitalize on Wall Street's capital problems by lending money to investment banks and other hedge funds currently feeling the pressure of the more than $345 billion of write downs resulting from under-performing assets linked to the housing market. On May 15, 2008, Paulson & Co., which bought 50 million shares of Yahoo stock during the first quarter of 2008, said it is supporting Carl Icahn on a proxy fight to replace Yahoo's board. In early 2008, the firm hired former Federal Reserve Chairman Alan Greenspan.

FULL ARTICLE AT WIKIPEDIA.ORG
This article is licensed under the GNU Free Documentation License.
It uses material from the Wikipedia article "John Paulson."
Back to Article
/