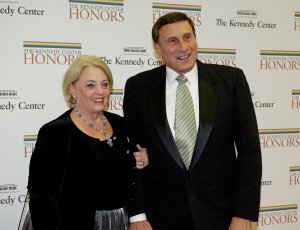 U.S. News // 5 years ago
Trump administration taking shape; Romney, Giuliani, Palin possible picks for key roles
So far, President-elect Trump has made appointments to six major administration positions, but there are many left to fill -- including several key slots.

U.S. News // 6 years ago
Oversight Committee to EPA on Flint: 'You screwed up'
The chairman of the House Oversight Committee sharply condemned the former head of the EPA for its role in the Flint, Mich., water crisis.
U.S. News // 7 years ago
Homeland Security credit cards used to spend $30K at Starbucks
Documents reveal U.S. Department of Homeland Security employees spent $30,000 at Starbucks in 2013, including $12,000 at one California location.
U.S. News // 8 years ago
DC officials decry congressional review of marijuana decriminalization
A House panel continued its consideration of the recent move to decriminalize marijuana possession in Washington, D.C., despite criticism from city officials.
U.S. News // 8 years ago
General: We never thought Benghazi was because of a video
A retired brigadier general who was in Africa at the time of the attack on Benghazi said they quickly knew a YouTube video wasn't to blame.
U.S. News // 1 decade ago
High-profile primary races in four states
High-profile party contests in U.S. congressional races headlined several statewide primaries Tuesday.
U.S. News // 1 decade ago
Congress leaders involved in highway talks
House Speaker John Boehner, R-Ohio, said he and the majority leader in the U.S. Senate were getting involved in negotiations over a new highway spending bill.

We are doing as good a job as we ca

When it comes to flying, older and more experienced is better

We were surprised at the level of bipartisan support it received

John L. Mica (born January 27, 1943) is the U.S. Representative for Florida's 7th congressional district, serving since 1993. He is a member of the Republican Party. He is the chairman of the House Transportation and Infrastructure Committee, starting January 3, 2011.

Mica was born in Binghamton, New York, but grew up in Florida and was educated at Miami Edison High School, Miami-Dade Community College and the University of Florida. He is a member of Delta Chi Fraternity and earned an education degree. Mica had been a businessman, serving in capacities in the real estate, telecommunications, government affairs, and consulting fields.

Mica was a member of the Florida House of Representatives for two terms from 1976 to 1980. There he served on several committees and was a leading Republican on the powerful Appropriations Committee. He was a staff member for Senator Paula F. Hawkins from 1981 to 1985, rising to become her chief of staff. After returning to private industry, he ran for Congress in 1992.

FULL ARTICLE AT WIKIPEDIA.ORG
This article is licensed under the GNU Free Documentation License.
It uses material from the Wikipedia article "John Mica."