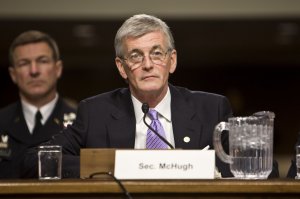 U.S. News // 6 years ago
U.S. Army declares elite Ranger School open to all servicewomen
The U.S. Army on Wednesday announced its Ranger School is now open to all qualified women, following an assessment period during which two women graduated.

U.S. News // 6 years ago
Fort Hood shooting victims to get Purple Heart
A change in the law allows those killed and wounded in the massacre at Fort Hood, Texas, to receive the Purple Heart, Army Secretary John McHugh said Friday.
U.S. News // 7 years ago
Major general stripped of title over handling of sexual abuse allegation
Army Maj. Gen. Michael Harrison demoted to brigadier general and forced to retire over mishandling of sexual assault complaint.
U.S. News // 8 years ago
Eternal flame transferred back to permanent place on Kennedy's grave
The eternal flame on U.S. President John F. Kennedy's grave in Arlington National Cemetery was relit Tuesday with the flame transferred from a temporary holder.

I will do everything I possibly can to work in concert with the Army leadership to provide you and to (Defense) Secretary (Robert) Gates the broadest based, the most accurate, the most informative information as you go forward in discharging your very, very weighty responsibilities in these dangerous times as commander in chief

This is the place where valor rests, a place of reverence and respect for all Americans

We are committed to providing our war-fighters with world-class equipment, and are confident that our body armor continues to defeat the threat to our soldiers

I don't want anybody to think this is the forgotten theater

McHugh began his senior career with Clyde in 1961. He went on to become a stalwart of the team, making 450 competitive appearances for the Glasgow club in 14 years, scoring 19 goals. McHugh was called up to the Scottish international team, but didn't win a cap.

McHugh left Clyde in 1975, and joined Forfar Athletic, where he stayed for two years, making 77 appearances, scoring 1 goal. He retired in 1977, having clocked up 527 senior career appearances and 20 goals.

FULL ARTICLE AT WIKIPEDIA.ORG
This article is licensed under the GNU Free Documentation License.
It uses material from the Wikipedia article "John McHugh."