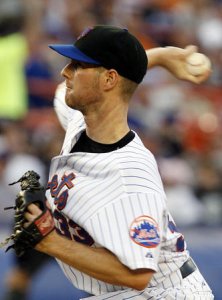 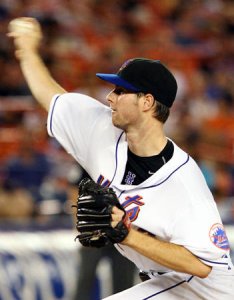 John Kevin Maine (born May 8, 1981) is an American professional baseball player. He currently is a starting pitcher for the New York Mets of Major League Baseball. He bats and throws right-handed.

Maine was born in Fredericksburg, Virginia. After graduating from North Stafford High School in Stafford, Virginia, Maine played college baseball for UNC Charlotte where he was named the Conference USA Pitcher of the Year in 2001 and set several single-season 49er's records including strikeouts and wins. In 2000, while still in college, Maine pitched for the Bethesda Big Train, a summer collegiate baseball team located a few miles outside of Washington D.C.

Maine decided to forgo his senior season at Charlotte and was drafted by the Baltimore Orioles in the sixth round of the 2002 baseball amateur draft. In 2003, he led all minor league pitchers in strikeouts, with 185. Long considered a top prospect after two years in the minor leagues, Maine made his debut with the Orioles on July 23, 2004. After spending the latter half of 2004 and most of 2005 shuffling between Baltimore and Triple-A Ottawa, Maine recorded his first Major League win on August 13, 2005, at Camden Yards with a 1–0 shutout victory over the Toronto Blue Jays in which he started and pitched five innings.

FULL ARTICLE AT WIKIPEDIA.ORG
This article is licensed under the GNU Free Documentation License.
It uses material from the Wikipedia article "John Maine."
Back to Article
/