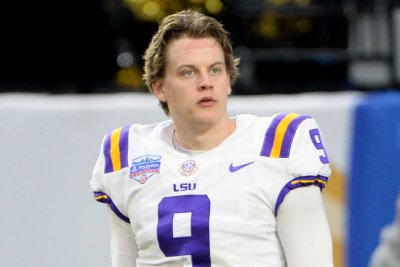 College Football // 3 years ago
Shutout completes No. 5 Wisconsin's perfect regular season
MINNEAPOLIS -- Alex Hornibrook threw for three touchdowns, Jonathan Taylor ran for 149 yards and a touchdown and No. 5 Wisconsin held Minnesota to 133 yards in a 31-0 win on Saturday.

NFL // 3 years ago
Buffalo Bills suddenly failing to pass passing test
ORCHARD PARK, N.Y. -- For four weeks, the Buffalo Bills were one of the most surprising teams in the NFL, the zenith coming when they improved to 3-1 with a somewhat shocking 23-17 victory in Atlanta over the defending NFC champion Falcons.

NFL // 3 years ago
2017 NFL Draft: Los Angeles Rams see fit for TE Gerald Everett in Sean McVay offense
It was never a secret the Los Angeles Rams were open for business if someone wanted to lure them out of the 37th pick in the NFL Draft.

Despite this shift in responsibilities, Whole Foods, along with many other companies with combined CEO/chairman roles, has been targeted by corporate governance activists for several years now seeking a separation of these roles

Mackey joined the Colts in 1963 and had revolutionized the position of tight end by 1966. During the 1966 season, of the nine touchdowns he compiled, six were scores of more than 50 yards, and he served as one of Johnny Unitas' primary receivers. Twice Mackey compiled season averages of more than 20 yards a catch, and his 10-year career average of 15.8 is considered remarkable for a tight end.

Mackey also displayed impressive speed for a tight end. During one season, the Colts decided to use him as a kick returner. He returned 9 kickoffs for 271 yards, an impressive 30.1 yards per return.

FULL ARTICLE AT WIKIPEDIA.ORG
This article is licensed under the GNU Free Documentation License.
It uses material from the Wikipedia article "John Mackey."
Back to Article
/