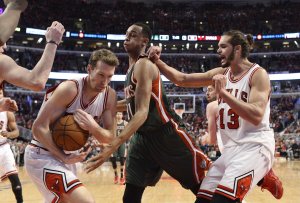 NBA // 2 years ago
Familiar faces on both sides as Milwaukee Bucks host Cleveland Cavaliers
Visiting players are still getting used to the Milwaukee Bucks' brand-new arena.

NBA // 2 years ago
Bucks, Raptors will have top players on floor for this meeting
TORONTO -- The Toronto Raptors and the Milwaukee Bucks will be going with their best this time -- Kawhi Leonard and Giannis Antetokounmpo, respectively.

NBA // 3 years ago
Philadelphia 76ers set sights on Milwaukee Bucks, No. 3 seed
With their feet firmly on the gas pedal, the Philadelphia 76ers head into their final game of the season riding their biggest winning streak in team history.

College Basketball // 3 years ago
No. 12 UNC Tar Heels face Syracuse Orange in ACC tournament
No. 12 North Carolina takes on Syracuse in the second round of the Atlantic Coast Conference Tournament on Wednesday at the Barclays Center in Brooklyn.

Henson was born in Stamford, Connecticut, to Joe and Barbara (née Wright) Henson. He has four older brothers, one of whom is Dan Henson, the President and CEO of GE Capital, Americas. He studied acting at Boston University, Circle in the Square, Playwrights Horizons and Three of Us Studios in New York City. He has starred in various theatre productions such as Rosencrantz and Guildenstern Are Dead, Conduct Unbecoming, Heinous Crimes and Other Delights, The Greenhouse Effect and Remote Evolution.

FULL ARTICLE AT WIKIPEDIA.ORG
This article is licensed under the GNU Free Documentation License.
It uses material from the Wikipedia article "John Henson."