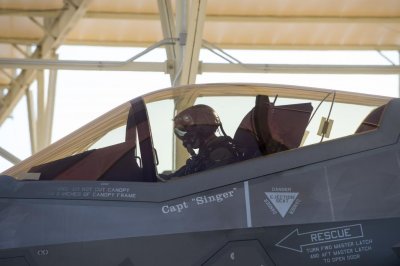 Defense News // 10 months ago
Congress, Pentagon to hold off on multiyear F-35 contract
The Pentagon has promised "significant progress" on the F-35 Lighting II Joint Strike Fighter, after hearing from lawmakers Wednesday that it's unlikely to receive a multiyear contract to continue the program.

Defense News // 10 months ago
Navy admiral: A 355-ship Navy may not be attainable
A lack of funding will prevent the U.S. Navy from maintaining a planned fleet of 355 ships, Vice Chief of Naval Operations Adm. Robert Burke said.

Many of those who bought the policies were killed during a deliberate, systematic and government-controlled genocide that began in April 1915

John Raymond Garamendi (born January 24, 1945) is a United States politician who has been a member of the United States House of Representatives since November 2009, representing California's 10th congressional district. A Democrat, Garamendi was the California State Insurance Commissioner from 1991 to 1995, the U.S. Deputy Secretary of the Interior from 1995 to 1998, and the California State Insurance Commissioner again from 2003 to 2007. He then served as Lieutenant Governor of California from January 8, 2007 until he was elected to Congress in November 2009.

Garamendi was temporarily a candidate for Governor of California in the 2010 election after announcing his candidacy on July 31, 2008. However, he suspended his candidacy on April 29, 2009, to run for Congress in the 10th congressional district. This seat was vacated by Ellen Tauscher, who resigned to become Undersecretary of State for Arms Control and International Security. Garamendi won the Democratic Party nomination in the primary election for the seat on September 1 and then won the special election on November 3, 2009.

Raised in Mokelumne Hill, California of Basque, Italian and Irish descent, Garamendi received a Bachelor's degree in business from the University of California, Berkeley, where he was both a football player and wrestler, and a Master of Business Administration from the Harvard Business School. He served in the Peace Corps in Ethiopia from 1966 to 1968. Garamendi is an Eagle Scout. Garamendi is also a member of Sigma Chi, as a brother of the Alpha Beta Chapter at Berkeley.

FULL ARTICLE AT WIKIPEDIA.ORG
This article is licensed under the GNU Free Documentation License.
It uses material from the Wikipedia article "John Garamendi."
Back to Article
/