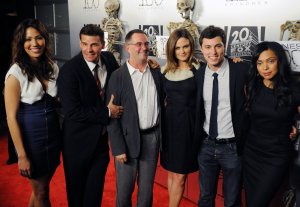 Odd News // 3 years ago
Deer crashes through thrift store in Alberta
A security camera at a thrift shop in Alberta captured the moment a confused deer ran through the store, took out a display and exited through a window.

Movies // 3 years ago
Ezra Miller writing a screenplay for 'Flash' movie
Actor Ezra Miller and comic-book scribe Grant Morrison are working together on the screenplay for a standalone movie focused on the superhero The Flash.

Top News // 3 years ago
The Almanac
On October 25, 1944, the Japanese military employed its first unit of Kamikaze pilots during the Battle of Leyte Gulf off the coast of the Philippines.

Fitzgerald was born in Boston, Massachusetts, the son of Irish immigrants, Thomas Fitzgerald of County Limerick and Rosanna Cox of County Cavan. He was the fourth of twelve children; of his siblings, both sisters died in infancy, as did his eldest brother. Joseph, the ninth brother, had severe brain damage from malaria and barely functioned. Only three survived in good health and after John's mother died when he was sixteen, his father wished for him to become a doctor to help prevent future tragedies of the sort that had marred the Fitzgerald family.

Accordingly, after being educated at Boston Latin School, he enrolled at Harvard Medical School for one year, but withdrew following the death of his father in 1885. Fitzgerald later became a clerk at the Customs House in Boston and was active in the local Democratic Party.

FULL ARTICLE AT WIKIPEDIA.ORG
This article is licensed under the GNU Free Documentation License.
It uses material from the Wikipedia article "John Francis."