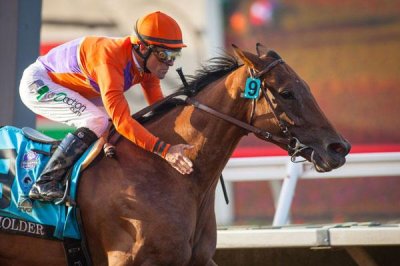 Horse Racing // 5 years ago
UPI Horse Racing Preview
Flintshire, Beholder, Stellar Wind, Minding and the first three finishers from the Kentucky Derby --- all in weekend racing action. Plus, much more!

We look forward to having Michael back in the playoffs

I think you would have to say he's very versatile

This change is much about the future and where we're going as an organization, as much as it is what has transpired here

John Ferguson (15 March 1830 – 30 March 1906) was a Scottish-born Australian politician. Born in Banffshire, he received a primary education before becoming a carpenter. He migrated to Australia in 1855, becoming a goldminer and carpenter, and then a builder and contractor at Rockhampton in Queensland. He was also a company director. He served on Rockhampton Council, including a period as mayor in 1880. In 1881 he was elected to the Queensland Legislative Assembly for Rockhampton, holding the seat until 1888. In 1894 he was elected to the Queensland Legislative Council. He successfully contested the Australian Senate in the 1901 federal election for the Free Trade Party, but did not resign his seat in the Legislative Council. (Holding seats in both state and federal legislatures simultaneously was not yet forbidden by the Australian Constitution.) Ferguson's interest remained in state politics and he seldom attended the Senate, leading to his seat being declared vacant on 6 October 1903, shortly before the 1903 federal election, which Ferguson did not contest. He continued in the Legislative Council until his death in 1906.

FULL ARTICLE AT WIKIPEDIA.ORG
This article is licensed under the GNU Free Documentation License.
It uses material from the Wikipedia article "John Ferguson."
Back to Article
/